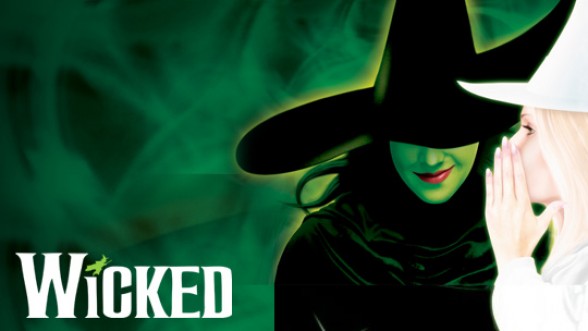 “Wicked” — the imaginative retelling of the Wizard of Oz that focuses not on Dorothy and Toto (who, incredibly, are never seen) but on the Wicked Witch and the Good Witch instead — is a big, colorful musical that fires on all cylinders from start to finish.
.
Well, almost all.
.
Mandy Gonzalez — the latest actress to tackle the role — plays the Wicked Witch, whose given name is Elphaba, a strong-willed, intelligent, green-skinned young lady who is sent off to sorcery school (think Hogwart’s without Harry) to learn to use her powers.  No sooner does she arrive than she finds herself rooming with Glinda, a spoiled airhead with enough suitcases to fill a luggage carousel and enough attitude to fill a dormitory — a big one.  Naturally, they eventually become friends (irony of ironies: the bad witch and the good witch started off as best buds — who knew?), Elphaba even overcoming, in an amusing early scene, Glinda’s harebrained efforts to turn her into a carbon copy (albeit a jaundiced-looking one) of herself.
.
When Elphaba gets her wish, and is given the opportunity to meet the Wizard of Oz (whom she has heard so much about), a sinister plot involving the Wizard’s true intentions is revealed, Elphaba is unfairly branded as evil, or “wicked”, and the musical’s main storyline is (finally) set in motion. Gonzalez is wonderful, particularly when she’s singing; she can belt with the best of them, and her first act finale, “Defying Gravity”, brings down the house even as she soars (with the help of some neat theatrical effects) into the rafters.  As Glinda, Katie Rose Clarke — nailing notes that lesser singers couldn’t reach with a stepladder — sings beautifully, too.
.
The problem, unfortunately, is that they’re not always singing — sometimes they’re ACTING — and their thesp skills aren’t always up to the excellence of their vocals.  Through much of the first act — until, really, that splendid finale — Gonzalez is so quiet, so reserved, that you just want her to don her pointy hat, hop on that darn broomstick, and start cackling already.  And Clarke, funny though she is, seems to be trying to draw laughs by channeling the antic spirit of the actress who originated the role seven years ago, Kristen Chenoweth.  Every bigger-than-life gesture, every squeaky-voiced zinger was so reminiscent of Ms. Chenoweth that it actually became a little, well… distracting.
.
And the show is — there’s no denying it — very long.  If you’re taking the kids, be warned: the first act alone clocks in at a staggering ninety minutes, the entire spectacle runs nearly three hours, and, thanks to some sluggish pacing, especially early, you may find yourself longing to hit the old Yellow Brick Road yourself.  (Though the audience at the performance I attended was filled with kids, they seemed to be mostly tweeners and teens; much younger children might not have the patience, or the stamina, to hang in there.)
.
But the sets are magnificent, the costumes are breathtaking, and the way Winnie Holzman, who wrote the libretto, brings in the Scarecrow, the Tin Man, and (in the briefest of cameos) the Cowardly Lion, is clever indeed.
.
It’s the Wizard of Oz as you’ve never seen it before.
.
THEATRE REVIEW by Stuart R. Brynien