In Jesse Eisenberg’s new comedy, The Spoils–which, as usual, he both wrote and stars in–he plays Ben, a pot-smoking, lager-swilling, socially inept slacker who lives in a New York City high-rise that’s been paid for by his parents, and fancies himself (though he has absolutely nothing to show for it) an avant-garde filmmaker.  When he bumps into an old grade-school acquaintance named Ted, and invites him up to his apartment (along with another childhood acquaintance, Sarah, now Ted’s fiancee), the memories–good and bad, but mostly bad–come flooding back.

Will Ben, who’s had a crush on Sarah for years, reveal his true feelings for her? How will she react? And how does she respond when he shares, in all its stomach-turning details, a particularly nasty dream he had about her, back when he was eight? (A dream, by the way, that ratchets up the play’s gross-out factor by–oh, about a thousand per cent.) And what of his roommate Kalyan’s big-time job interview at Ted’s glitzy Wall Street firm? Will the amiable and earnest Kalyan finally be able to free himself from under Ben’s thumb–they’re totally incompatible, after all–and find a place of his own?

Eisenberg is at his motormouthed best, darting about the stage like a gangly, knobby-jointed dervish, moving from dinner table to couch to chair to bedroom, always active, always talking, sprawling out languidly now and then to recharge his batteries, before starting all over again.

As Kalyan, TV’s Kunal Nayyar (The Big Bang Theory) is sweet, endearing, often funny, and so different from the angry young Ben that THESE two should be the new Odd Couple. As Kalyan’s girlfriend Reshma, who hates Ben and isn’t afraid to admit it, Annapurna Sriram is terrific; and as Ted and Sarah, Michael Zegen and Erin Darke are superb.

Director Scott Elliott builds the action skillfully (Ben can’t keep his anger in check no matter how hard he tries, which leads to a couple of volatile confrontations at the end), and all of it takes place on a nicely-detailed set by Derek McLane in which Ben’s living room stands front-and-center…much like brutish, boorish Ben himself. 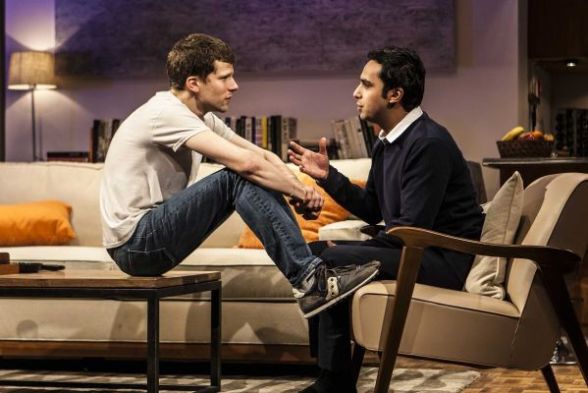 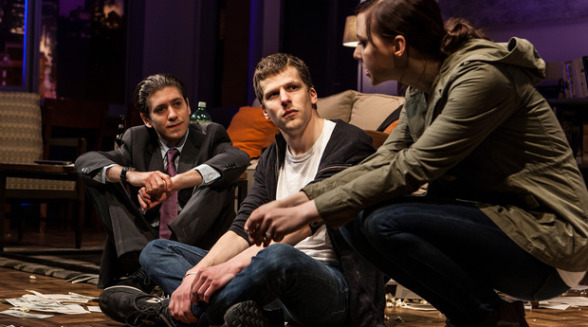 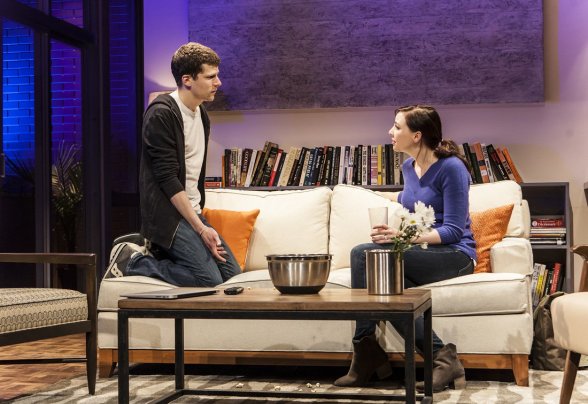 (NOTE: The Spoils will be playing at the Pershing Square Signature Center on West 42nd Street through June 28.)