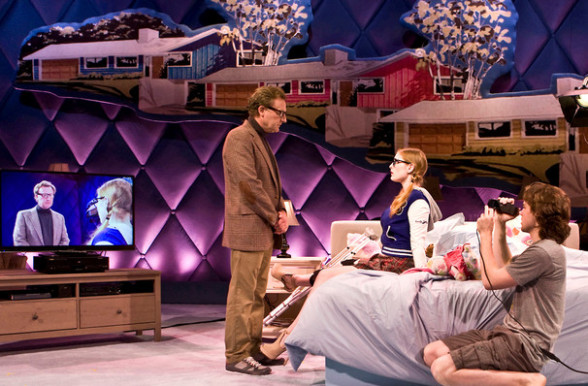 Thomas Bradshaw has made a name for himself with plays that aim to push the boundaries of theatergoers, exploring race, sexuality and other edgy topics throughout his career as a playwright. His most recent play, “Intimacy”, premiered by The New Group off-Broadway and directed by Scott Elliott, is a comedy about pornography that—it becomes increasingly clear—is more of a pornographic comedy. Bradshaw parodies bad pornography and contemporary sit-coms in this uncomfortably funny blend of sex, awkwardness and the suburbs.

Three families live in the same Anytown, USA and are linked conveniently by their teenaged children. Matthew’s mother has died and James, his British father, doesn’t know how to cope with her loss. Actually, he does know how to cope with her loss, he’s just embarrassed by his mode of coping. Janet is a popular high school senior whose Women’s Studies professor mom and Queer Studies PhD dad have to come to terms with her decision to enter the adult entertainment world. And Sarah is the brainy daughter of Joey, a contractor and a Wal-Mart employee who is only applying to Ivy League schools. The characters are racists, they are misogynists, they are anti-immigration immigrants, they buy guns to defend themselves against their neighbors. They are, ultimately, the least political correct members of 21st century American society.

All bodily functions (and fluids) are fair game as the play moves from tawdry plot point to tawdry plot point. Matthew wants to be a filmmaker, but Sarah wants him to be her prom date and frottage partner. Matthew can’t stop watching Janet through his bedroom window, but she has eyes for someone else in town.

Ultimately, Intimacy is a piece of fluff that seems like it likes titillating (or offending) its audience. The plot is pretty wispy and the acting sometimes feels amateurish. It is not a play for blue-haired matinee goers, but it also isn’t actually edgy or perverse. It falls somewhere in the middle. It’s strangely sanitary, while also forcing the audience to wonder how far the actors are really going.