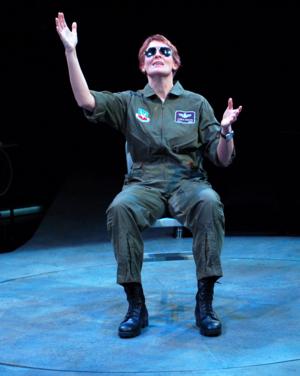 George Brant’s Grounded has been performed in Edinburgh and London before landing in New York and other regional theatres across America. The Pilot in Grounded, played astonishingly by Hannah Cabell, stands onstage in her flight suit and tells us her story about being a top fighter pilot grounded after becoming pregnant. When she is assigned to pilot drones from an office in the Nevada desert she begins to stress the difference between being up in the sky and being stuck in a chair for 12 hours staring at a screen. Her life at home and her life at work become melded together and she can’t find the separation needed to do her job well. She’s a compelling character and a fascinating narrator. Her tone is funny and edgy and also a little terrifying. Her glee at killing “military age men” is jarring and her inability to leave her job at the office becomes a problem for her family and for the US military.

Ken Rus Schmoll has directed the piece with bursts of music and with subtle shifts in lighting and movement. Grounded is about the language and the story and doesn’t need much more than that. Schmoll and Cabell both know this and the piece becomes hinged on a lack of movement and a few repeated gestures and expressive tics. 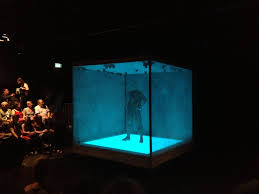 The Pilot, benefitting from Brant’s command of language and imagery, cleverly describes the world in which she is forced to live. She decries the strip in Vegas where her husband ends up working a blackjack table. She refers to her drone training as being like a typing class. And the screen she obsessively watches is made, in her mind, of putty. What happens when she stops living in the putty world, when she can’t distinguish between the desert she’s driving through and the desert she’s flying over in a drone, is the real heart of the piece and Brant has clearly done his research here. The Pilot’s experience feels authentic and original and her transition from high-flying ace to commuting mom is organic. As her excitement about killing at top target builds, we, the audience, become complicit in her actions.

The play ends satisfyingly. The pieces of which the play is built cohere and we are left to think about the implications of all that we have seen. Grounded is an important play for the 21st century and one that entertains while also questioning and informing. 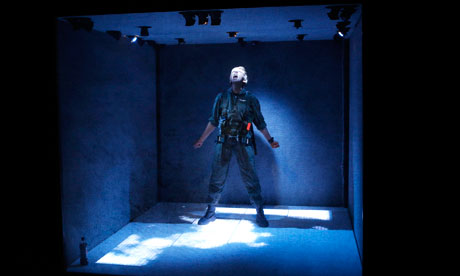