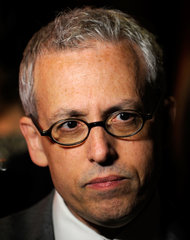 There’s absolutely nothing wrong with Roundabout’s revival of Donald Margulies’ Pulitzer Prize-winning Dinner With Friends. The play, which premiered at the Humana Festival in 1998 and won the Pulitzer in 2000, follows two couples as their intertwined relationships change and stay the same throughout a 12 year period.

The play opens with Gabe and Karen, two foodies who have just returned from Italy, entertaining their friend Beth with tales (and plates) of delicious food. Beth’s husband Tom is unable to make it that night because he’s flying to Washington, but as the night goes on Beth breaks down and tells her friends (who set her up with Tom in the first place) that Tom has asked for a divorce and is seeing a flight attendant (actually, she’s a travel agent). The play continues to explore the complications that arise when two couples are suddenly rent apart by divorce. While Tom and Beth try on new personalities and new relationships, Gabe and Karen must figure out how they will continue to muddle along. And whether this change will impact their relationship with one another.

Dinner with Friends is funny, impeccably well-acted by an outstanding Off-Broadway cast composed of Jeremy Shamos, Darren Pettie, Marin Hinkle and Heather Burns. The two couples are clever, high-achieving and striving for something more. The relationship with Gabe and Tom is more nuanced than the relationship between Karen and Beth. Tom believes that Gabe is jealous of his new life, but Gabe seems confused and offended. “The key to civilization, I think, is fighting the impulse to chuck it all.” Gabe says to Tom when trying to explain their differences. He doesn’t want to have a mid-life crisis, it scares him and makes him anxious. Meanwhile Karen is terrified that something is wrong with their relationship because they can talk about everyone else’s lives, but not their own.

Pam MacKinnon, who won the Tony for the recent Broadway revival of Who’s Afraid of Virginia Woolf?, has a knack for contemporary American plays about relationships. This play is entirely in her wheelhouse and almost seems too easy of a choice. In fact, that’s the issue with this production in general, it’s all a little too easy. Realistic sets slide in and out of a concrete box, with one burst of color at the top of the second act, when we see the first time Tom and Beth meet on Martha’s Vineyard in a beautiful, sunny, kitchen with an expressionistic backdrop. The scenes are funny, mildly thought-provoking and utterly watchable. It’s well-written, well-acted, entirely unoffensive (unless you find infidelity offensive), Botoxed theatre. One may as well be in a movie theater or on a couch watching it on TV. But in a season with slightly more risky fare, Roundabout can’t be faulted for lobbing a softball this time around.