In Pittsburgh, Pennsylvania, two gay men live together with the mother of one of them. Their relationship seems alright, as they enjoy wine and delivered food among chickens living in their backyard. Until a young lady shows up.

She’s the the sister of one of the men, whom he hadn’t seen since she was 4–she’s 17 now. Well, she had no idea that her brother escaped the very farm where she grew up because he couldn’t stand their crazy, mean mother. His sister tells them she’d like to spend some time with them as she’s applying for a scholarship in that city.

The actors playing the chickens and human characters simultaneously are amazing, the choreography is outstanding. Apparently the idea is to compare birds and humans: Noisy, cautious, unwise, mean, desperate, angry, compassionate, loving, and productive. Productive is a word you should keep in mind, especially when a chicken lays an egg at the end of the story: It’ll tell a lot about human behavior and chicken behavior. Lovely way to tell a story. 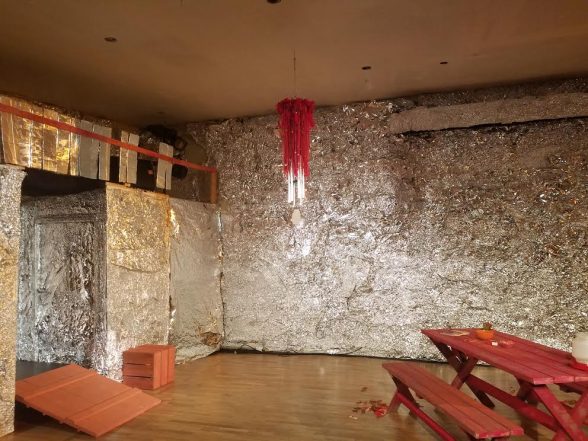