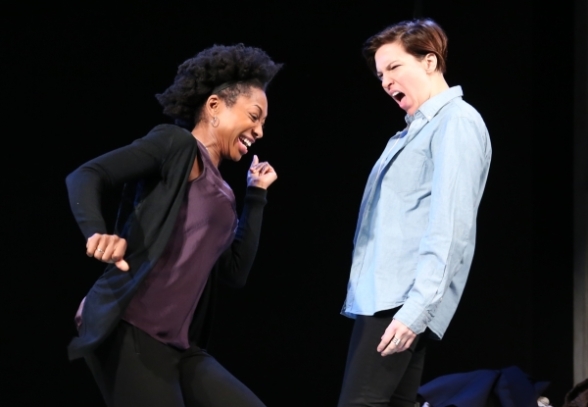 Playing at City Center and presented by the Women’s Project, Tanya Barfield’s new play Bright Half Life skips through time and space in a dissection of a relationship between two women that is equal parts exhilarating and exhausting. Tightly written and impeccably executed, Bright Half Life introduces us to Vicky and Erica as Erica is trying to get back together with Vicky by proposing. The play continues at break-speed, as Barfield throws us into scenes without much context, but deftly gives us enough detail and information to keep us engaged and invested. Scenes are interrupted and repeated, time moves forward and backward and we see Vicky and Erica’s relationship through all the important moments, but also the possibilities that maybe didn’t happen.

The play, while only 75 minutes, spans 45 years of Vicky and Erica’s relationship, from their first meeting in the office place where Erica is a temp and Vicky is a high-achieving manager to the bittersweet revelation at the end of the play. The ecstasy, the heartbreak and the in between are all given equal weight as Barfield explores whether two people can be soul mates and how soul mates interact in a relationship that lasts for half a life.

Despite taking place in countless locations (a Ferris Wheel, an office, an elevator among many others) Bright Half Life is staged very sparsely, with just two benches and relying heavily on the talents of its actors, Rebecca Henderson (Erica) and Rachael Holmes (Vicky), to tell the story of these two women who fall in love despite the obstacles between them. Barfield and director Leigh Silverman trust their the audience to follow the story despite its non-linear nature and quick cuts between scenes and the actors move effortlessly between highly charged emotional scenes.

Barfield has written a stunning, intimate, highly theatrical play with memorable characters that explores the notion of soul mates through subtle use of metaphor, heightened circumstances and all the complications of contemporary love.