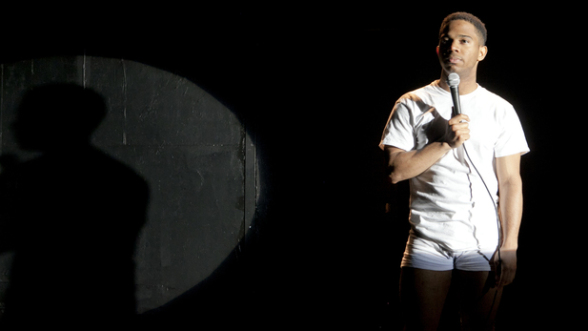 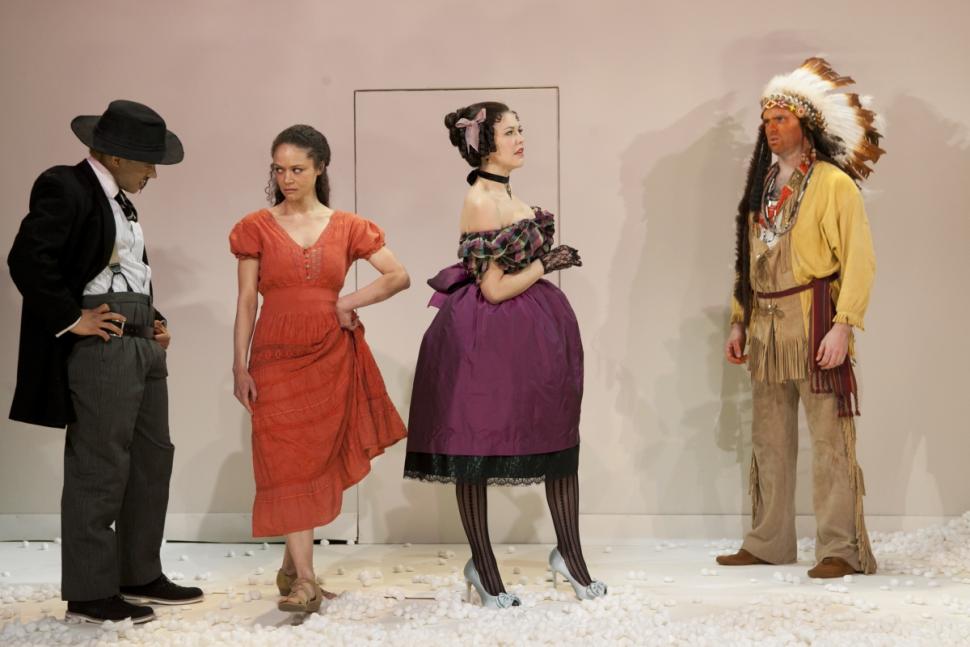 .
Going to the theater has all to often become somewhat of a sterile ritual made of luxurious clothing, fancy meals, (spirited) side drinks, and a plethora of indulgent intellectualism. And while this statement sounds an awful lot like a gross generalization, it does possess the basic elements of truth at the base of generalizations, that is, until an exception is observed.
.
But let’s start at the beginning, you walk into Theater for a New Audience (TFNA), up its stairs, and are faced with its uniquely structured stage and seats, brought to life by acclaimed architect Hugh Hardy. You sit down in what happens to be an extremely low-budget-friendly house, with inexpensive tickets, discounts, and generally good (classical), or acclaimed (contemporary) work on stage. And as a man in his underwear walks on the bare stage and starts telling you about his life as a (“low-grade depressed”) black playwright, saying something along the lines of “I can’t even wipe my ass without someone trying to accuse me of deconstructing the race problem in America”, you are quickly drawn into the theatrical magic that this group of artists has created.
.
He is BJJ (incredibly talented playwright Branden Jacob-Jenkins), portrayed by the amazing Austin Smith, who then proceeds to explain that his play is the adaptation of an 1859 melodrama by Irish playwright Dion Boucicault, who joins him on stage (played by the wonderful Haynes Thigpen). This lack of a ‘fourth’ wall (which did not exist the way it does today, before naturalism), is a characteristic that will be maintained through the course of the entire play, which is a real relationship between audience and theater professionals, in the best possible way.
.
You start at the beating heart of a Louisiana cotton plantation called Terrebonne, where you witness the life, struggles and intertwinements of the lives of “Octoroon” Zoe, literally a woman that is one-eigth black, vividly portrayed by Amber Gray, Minnie and Dido (played with wonderful depth and spirit by Maechi Aharanwa and Pascale Armand), George (the dead plantation owner’s nephew) and villain M’Closky (both also played by Austin Smith), Miss Dora (wonderfully played by Mary Wiseman), and a few other brilliant characters. As the play moves along, it starts to become somewhat more abstract and dark in tone, as various incredible theater tricks literally put harsh realities in our face, carrying the message of this play with incredible efficacy.
.
I could sit here and write many things about this incredible piece of theater, I could say that the set design and lighting are absolutely brilliant, that the live music accompaniment is a touch of class and genius, that the writing is stellar (2014 Obie-winning) material, or that the acting is just the right mix of profound intensity and the selfless will to lightheartedly entertain, bringing you from tears to laughter within moments. I could go on to say that it takes a lot of theater-going to see many incredibly written and executed characters, and that to see them all on a single stage is pure bliss.
.
And I could proceed and say that moments like the one in which Austin Smith, an African-American actor, gives life to the fight between two of his characters, both Caucasians, by physically enacting both of them simultaneously is a moment of pure theatrical genius. But at some point, I’d either loose you because you haven’t seen the show, or I would loose you because your own memories of it have kicked in, given the wonderful specificity of every word, action and event that takes place on the stage.
.
So the bottom line is, get on line, on the phone, or go to Theater for a New Audience, and see SoHo Rep’s An Octoroon. Trust me.
. 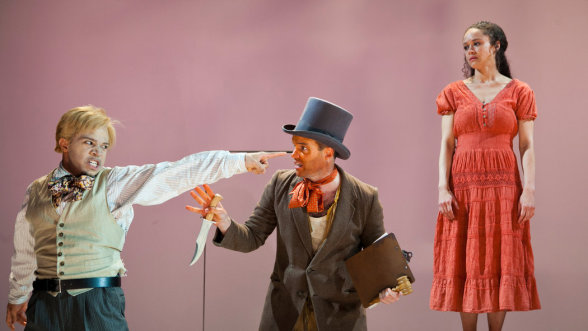 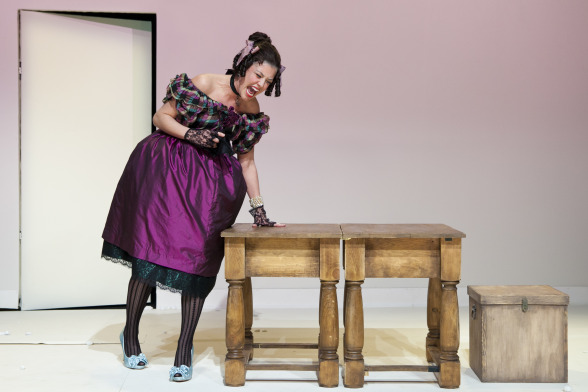 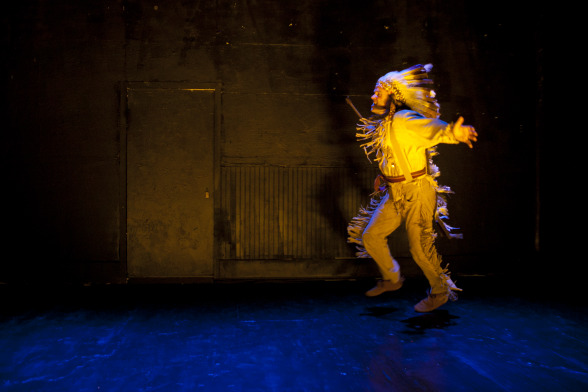 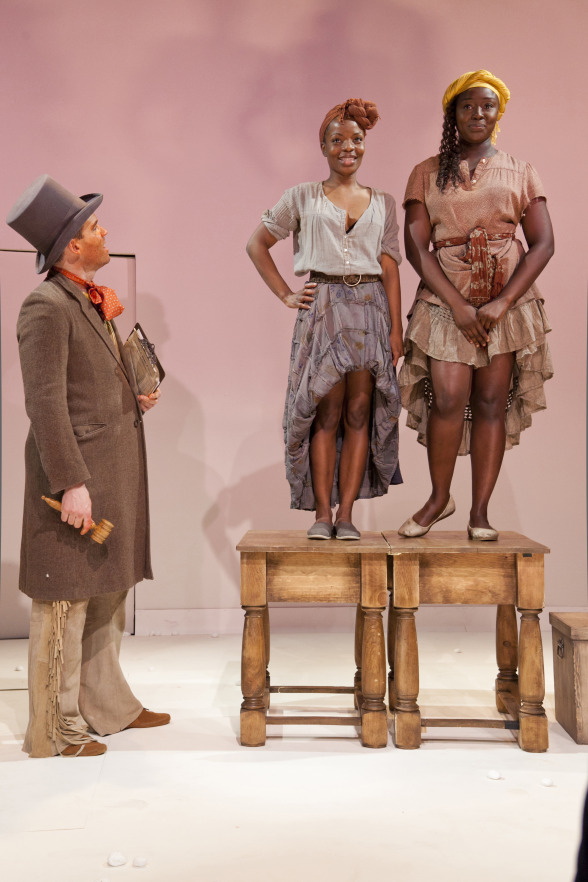 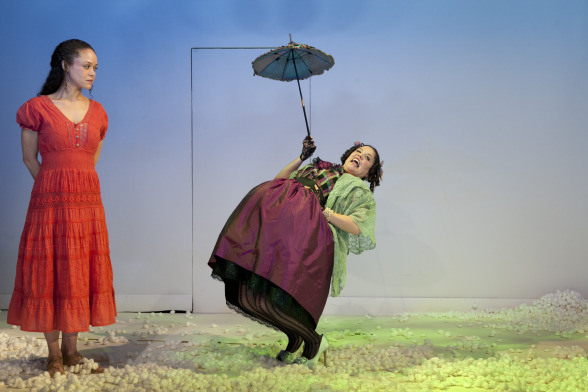