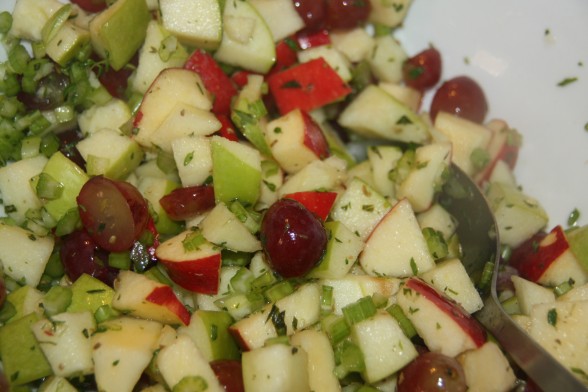 The Waldorf salad was first served at the Waldorf-Astoria Hotel in the last decade of the 19th century in New York City. Back then, the famous Midtown Manhattan hotel, located on the site where the Empire State Building is today, was called simply Waldorf, hence the name of the salad.
.
The famous Waldorf salad can be made with either chicken or turkey breast. We chose turkey because this is a very special version of this recipe, and we find chicken a lot more common in our weekly meals whereas turkey is used less often, which makes it special. If you follow these steps, a poached chicken breast will as well be just fine. No meat can also be done for a vegetarian version, just use 1/4 cup mayonnaise for it.
.
Very soon we will publish our recipe on how to poach a turkey breast and a chicken breast. We’ll also publish our homemade mayonnaise recipe, which tastes better than Hellmann’s, unarguably.
.
1 large red apple, cubed
1 large green apple, cubed
3 tbsp lemon juice
1 cup grapes, halved
1/2 cup mayonnaise
1 tbsp Dijon mustard
1 tsp fennel seeds, crushed in a mortar and pestle
1 shallot, minced
2 celery stalks, diced
1/2 cup walnuts, toasted with 1/2 tsp kosher salt, coarse
1 tsp thyme, fresh and finely chopped
1 tbsp tarragon, fresh and finely chopped
1 tsp salt for the salad
2 lb turkey or chicken breast, poached and diced in 1/2-inch pieces
a leaf of lettuce per serving
.
Cut the apples, one at a time, first in half, then quarters (remove the core at this point), eighths, and finally approximately 1/2-inch cubes. Place the cubes in a bowl and press lemon juice over them immediately–it takes only 7 minutes for apple cubes to darken, which you want to avoid. Same process with the second apple. Toss well.
.
In an cast iron skillet, toast the walnuts with 1 tsp kosher salt from 2 to 3 minutes, on low heat. Put them on a cutting board leaving most of the salt in the skillet. Chop coarse and add them to the salad.
.
Add all other ingredients to the bowl, including toasted walnuts. Let your meat cool off for about 15 minutes before you cut them into 1/2″ cubes, and add them to the salad. Once all ingredients are in, toss well. Refrigerate for 30 minutes before serving on a leaf of lettuce each serving.
.
Yields 8 servings.
RECIPE by Lucas Eller