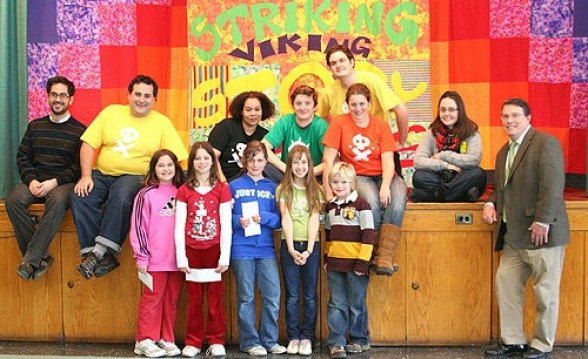 One floor below the thousands of titles at the world famous Drama Book Shop — in the basement level performance space known as the Arthur Seelen Theatre — the laughter of children can be heard every Saturday afternoon (along with a few whoops and screams) as the shop’s resident theatre company, the Striking Viking Story Pirates, takes the stage.

The Story Pirates’ specialty is turning the stories submitted to them by grade schoolers (some as young as six or seven) into exciting — and funny — performance numbers, complete with lyrics, music, choreography and costumes. A recent show featured a mix of the new and the old, as the Pirates premiered three new stories to go along with a handful of older favorites. To the delight of everyone, parent and child alike, the stage was taken over by roaring dinosaurs, nasty frog goblins, prank-playing grannies and talking socks. Costumes were casual but colorful, the songs were tuneful (“Why Would You Do What A Dog Does?”, a song about a little boy who’s just a tad too eager to mimic the family pooch, was among the catchier ones), and serving as the “narrators” were a couple of puppets who would have been right at home with Kermit and Miss Piggy.

To cap it all off (the show runs about an hour, without an intermission), the Pirates came out and improvised a story, “Whose Line Is It Anyway”-style, “written” by the kids in the audience. (To the best of our recollection, it had to do with thirsty monsters, bottles of soda, and cauldrons of boiling hot water. Confused? The kids weren’t–including our seven-year-old daughter, who sat glued to her seat throughout.)

Bottom line: if you’re looking for some good, clean family entertainment, go see the Striking Viking Story Pirates at the Drama Book Shop. And if you have a budding Shakespeare on your hands, send in your kid’s story because, who knows — you just might see it on stage one day!