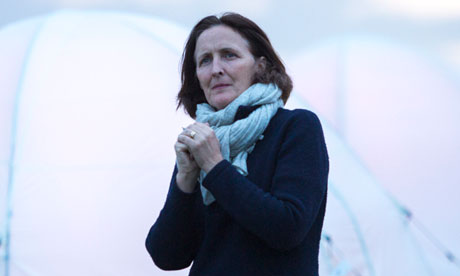 Fiona Shaw is back in New York after this spring’s Broadway production of The Testament of Mary. Once again she’s performing a piece of non-dramatic literature as a long monologue but this time she’s in Brooklyn, doing less overtly political material and has a limber dancer rather than a bird of prey as her co-star. Samuel Taylor Coleridge’s The Rime of the Ancient Mariner is part of Brooklyn Academy of Music’s Next Wave Festival and has been staged by Phyllida Lloyd (Lloyd’s fantastic work on Julius Caesar was seen at St. Ann’s Warehouse earlier this fall). This production of The Rime of the Ancient Mariner was first produced in Epidaurus in Greece and later at the Old Vic Tunnels in London. Shaw first learned the poem to help her while jogging and suggested to Lloyd that they stage a production in her kitchen.

There’s a very specific audience for a show like this and BAM seems to be the appropriate venue for that audience. The Rime of the Ancient Mariner and Coleridge’s other poems from that period represent the beginning of the Romantic movement and also herald the advent of modern poetry.

Shaw starts by wandering through the audience, as if looking for someone to tell her story to. She brings audience members onto the stage and molds them into a shape that eventually opens and closes the performance. The play is staged on a sparsely set stage that indicates a ship’s mast and uses choreography and lighting to great effect. Her use of Daniel Hay-Gordon as a live puppet who represents different characters opens up the poem to help the audience understand the meandering story. The story is of an ancient mariner who tells his story to a wedding guest and slowly infects him with his tale about his travels at sea. The mariner shoots an albatross and his crew is angry and forces him to wear the albatross around his neck. The crew eventually dies after an encounter with a ghost ship and the surviving mariner must figure out a way to get home.

Following the narrative of the story can be difficult at points during the show, but the incorporation of music, shadow play and puppetry carry the audience along. Shaw’s a formidable actress. She has a fantastic voice for poetry and her presence on stage is strong and commanding. Hay-Gordon’s physicality can be intoxicating. There’s one particularly gorgeous moment where he uses two masks and different sides of his body to inhabit two very contrasting characters. It’s a moment that lightens the otherwise murky text.

To see a fantastic actress act as a conduit of sorts for this tale of misfortune and death is not a happy evening of theatre, nor, necessarily, an inspiring one. But there are elements of true theatricality that glimmer throughout the piece.