Disney returns to its old-fashioned roots in the wildly colorful, darkly magical — and, most importantly, hand-drawn — “The Princess and the Frog”, a New Orleans-set fairy tale based on “The Frog Prince” that also happens to be the first Disney feature to star both an African-American heroine and a predominantly African- American cast.

The tale revolves around Tiana, the pie-eyed daughter of hard-working parents who dreams of growing up to become the owner of a big restaurant–the biggest and best in all of old New Orleans.  She waits tables and scrimps and saves in the hope that one day she’ll have enough money to buy that riverfront property she’s had her eye on.  When she believes she has finally saved enough, the deal she had planned on making falls through and her lifelong dream appears all but dead–until, that is, the handsome (and rich) Prince Naveen visits the Crescent City, and takes up residence at the opulent home of her childhood friend, the coarse but charming Charlotte.  Naturally, Charlotte herself–the only “traditional” Disney blonde in the movie–has her eye on the Prince, too.  Can Tiana woo her way into the Prince’s arms before her best friend does?

Enter Dr. Fasilier, aka the Shadowman–tarot reader, potion maker, and voodoo practitioner extraordinaire.  He has his own plans for the unsuspecting prince: aided by the young scion’s bitterly resentful footman, Lawrence, he hopes to get his talon-like fingers on the prince’s wealth, seize control of all of New Orleans, and sate both his own voracious appetite and the appetite of his spirit world masters.  In short order, the prince is turned into a frog; Tiana, coaxed into believing that a kiss will set him right again, is promptly turned into a frog herself; and suddenly, they’re just a couple of amphibians bounding about the bayou, fleeing evil alligators, cavorting with friendly ones, befriending southern-fried philosopher fireflies, and–ultimately–meeting a blind earth mother type named Mama Odie, whose own magic, they’ve been promised, can make them human again.

Do they revert to their former selves? Does Tiana open the grand, jazz-filled restaurant of her dreams? Will Dr. Fasilier get the comeuppance he so richly deserves? That’s what the second half of the movie is all about.

At times resembling the old Disney classic “The Jungle Book” (Naveen and Tiana meet just as many creatures in the bayou, it seems, as Mowgli encountered in the jungle), and at others “The Little Mermaid” (see the bride and groom about to exchange vows! see some critters crash the ceremony and send the villains scurrying for safety!), “The Princess and the Frog” owes a lot to Disney history, but also to its creators, who made the principal characters something other than lily-white, and have seen their gamble pay off handsomely.

The performances are excellent, the songs are tuneful (with, of course, quite a bit of jazz thrown in), the accents are as deep-fried as a po’ boy sandwich, and the New Orleans backdrop–before, during, and after Mardi Gras–will make you want to grab the first flight out and visit the Crescent City yourself.

Kids might be frightened by some of the voodoo elements, but the rest of the film they’ll like just fine.  “Princess” isn’t quite the revelation that “Little Mermaid ” was, or as exciting as, say, “Beauty and the Beast”,  but no matter; add it to the pantheon of fine Disney films anyway.  It’ll make you laugh, it’ll make you sing…it might even make you tap your feet! 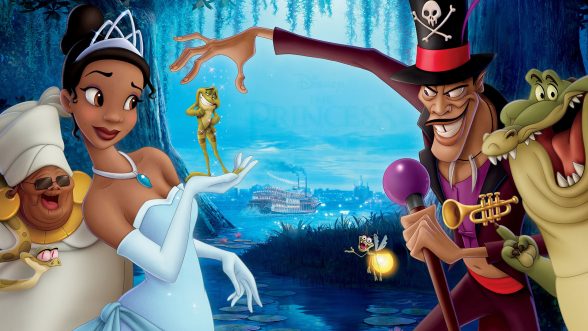 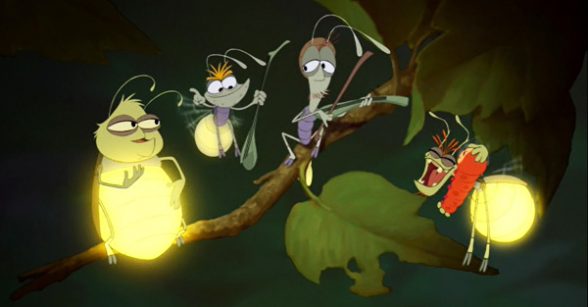 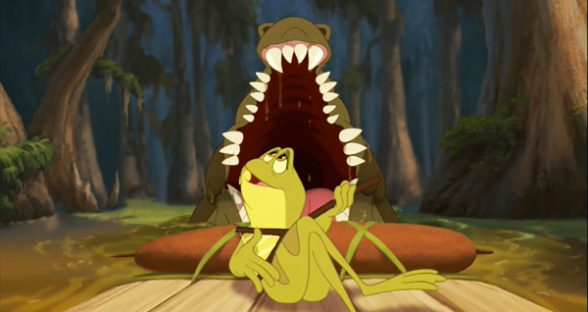