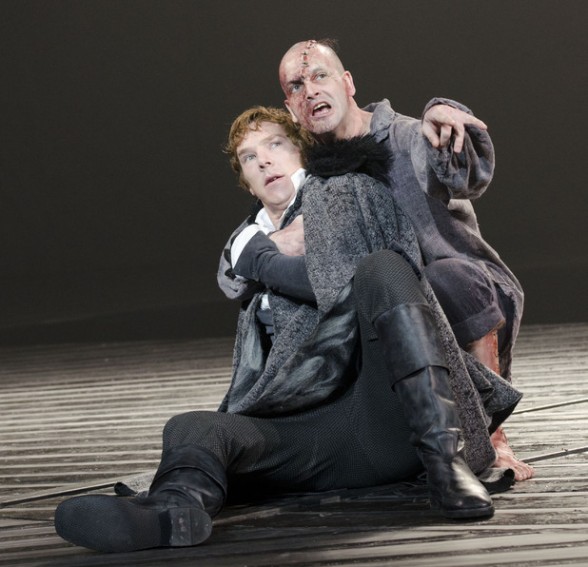 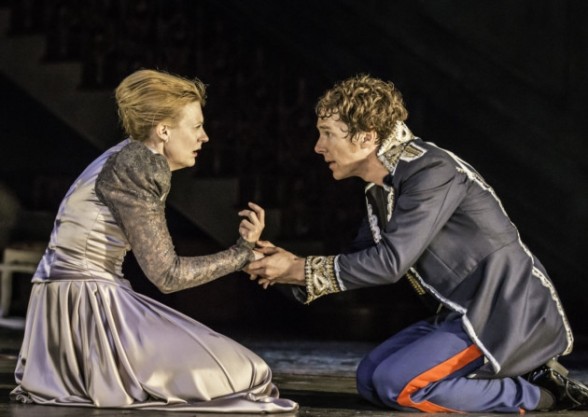 The Barbican production of Hamlet with Benedict Cumberbatch in the title role sold out within minutes. For those of us without tickets who hoped to glimpse this production, the closest thing we have is the NT Live production, which was broadcast around the world a month and a half after the production opened.

Cumberbatch’s Hamlet is one who listens to nostalgic music and whose manic, brilliant soliloquies are spoken while those around him move in slow motion. This choice seems to be a metaphor for the production as a whole. Where Cumberbatch’s Hamlet is clear and specific, much of the rest of the production is muddled. The design choices seem rooted in different periods (I wondered whether we were in the ‘30s or the ‘70s throughout the broadcast due to costume and prop choices throughout) and the location seems very specifically Denmark, until all of a sudden it doesn’t. There’s also a haunting soundtrack that pulls the audience out of the text and into a different world entirely, one that feels very filmic, but then doesn’t render itself well on the screen.

This is not to say the entire production is without merit. Ciaran Hinds is terrific as Claudius, truly terrifying and increasingly powerful and, while confusing, the costumes are stunning. But one watches it wishing that the production had either had more faith or less faith in its audience. Instead Lyndsey Turner’s Hamlet falls into a space that makes specific choices (and expensive choices!) and then doesn’t fully warrant them.

One possibility is that this is a world wherein the supernatural has a firm hold. King Hamlet appears like a zombie with a common accent (which is very confusing, since he’s a King and we’re supposedly in Denmark) and in later moments there’s a chase scene that could either be farce or fantastical. Another possibility is that this is a production of Hamlet that is very specifically about European colonialism and nation-building. Quite a lot is made of Norway’s attempts to cross into Poland and the first act ends with a strong invocation of England. And so rather than watching the play, really watching the play, the audience is forced to figure out what the meaning of this Hamlet is, compared with every other adaptation of Hamlet that is done.

And these choices do not render themselves well on the screen and is an example of why many of these live broadcasts can fall flat. There is an inherent magic to staging a play. The audience knows that they are watching a play because live actors are standing in front of them on a stage. When one is sitting in a movie theater, across an ocean from the stage, it is harder to make that leap. And it is even harder to make that leap when you are watching actors that you feel like you know, from television or film, and some of them are doing truly excellent work and the rest of them are doing transitional movement for the sake of doing transitional movement. 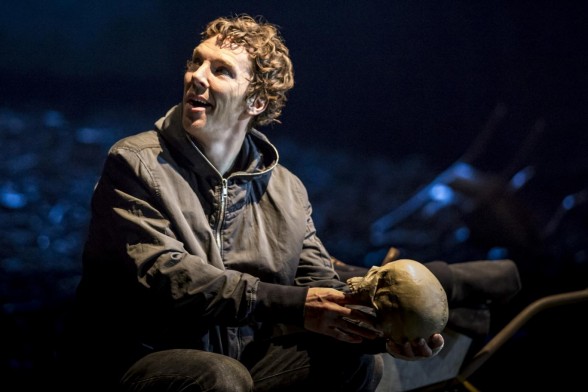 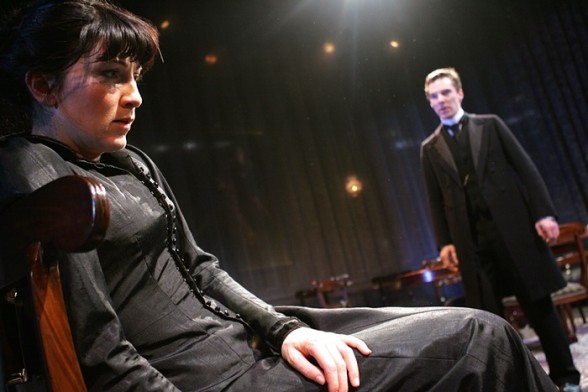