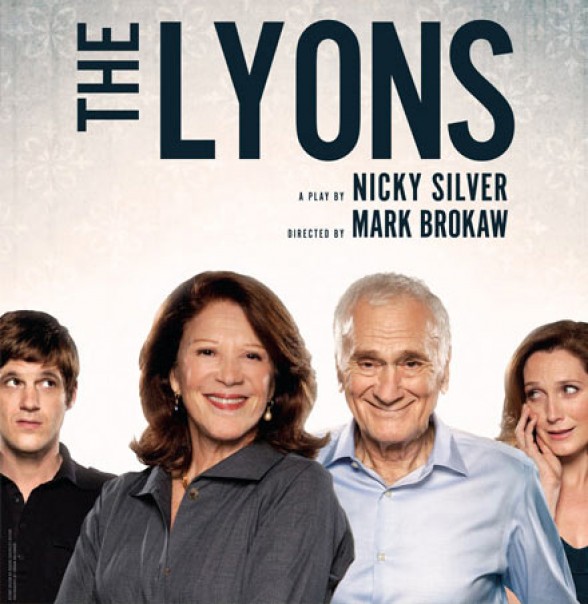 An old man, ashen-faced and grimacing in pain, lies in a hospital bed, dying.  A few feet away, his wife — apparently oblivious to his suffering — thumbs through a magazine, looking for ways to redecorate the living room.
.
What, exactly, is going on here? Does the wife not know her husband is dying? And if she does, what kind of relationship could they possibly have that would allow her to behave so … monstrously?
.
As it turns out, she knows full well that her husband is fading fast, but because this is Ben and Rita Lyons, and they rule as dysfunctional a family as has ever been portrayed on the Broadway stage (there is so much animosity among Ben and Rita and their adult children, Lisa and Curtis, that at times they make the typical Tennessee Williams clan look like the Waltons), compassion, empathy — even love — are in dangerously short supply.
.
And yet, Nicky Silver’s newest play isn’t as serious as all that may sound.  It’s a comedy, through-and-through (albeit a dark one), and right in the middle of it, eliciting gales of laughter with the merest arch of an eyebrow, is the wonderful (and, deservedly, Tony-nominated) Linda Lavin.  As the acerbic, acid-tongued Rita, Lavin doesn’t just play each moment — she inhabits it.  Whenever she is on stage — commanding it like the seasoned pro she is — the comedy soars.  (You won’t have a better time at a Broadway show this year than during the long hospital room scene that opens “The Lyons”, a hysterically funny piece of theater that Lavin dominates from start to finish.)

.
Her foul-mouthed husband (his rationale: I’m dying anyway, so who cares if I launch a few F-bombs?) is played by fellow stage vet Dick Latessa; despite the fact that he spends the entire opening propped up in bed, barely even moving, he has some of the funniest moments in the play.
.
Kate Jennings Grant as Lisa, the emotionally scarred, alcoholic daughter, and Michael Esper as the gay and delusional son (a “creepy” kid, by Papa Ben’s homophobic standards), do fine work, too.

.
But the night belongs to Lavin: as the barbs fly and the tension mounts — Silver has a way with a line like few playwrights working today — you can’t take your eyes off her.
.
Tony voters could do worse — far worse — than giving her performance the recognition it deserves.
.
THEATRE REVIEW by Stuart R. Brynien

As for another kind of comedy…

The new sketch comedy troupe, Anti-Social Wife, recently finished a three-night run at the Drama Book Shop’s Arthur Seelen Theatre.
.
The performers — Matt Alspaugh, Charles Gould, Brad Howe and Jenna Sisson — offered sketches featuring everything from an eager-to please uncle trying (and failing) to entertain his gloomy young nephew, to a hyper-enthusiastic (but sadly out-of-shape) conditioning coach (Alspaugh) struggling valiantly, but mostly futilely, to keep up with his fit young students.  Kudos to Alspaugh for turning in a performance so frightfully over-the-top that an ambulance should have been standing by just in case.
.
Not every sketch worked, and few (if any) came even close to resolving themselves.  But this was sketch comedy, after all — not Shakespeare — and if the show wasn’t exactly gut-bustingly hilarious…well, chalk that up to growing pains.
.
Is Anti-Social Wife worth checking out?
.
You bet.
.
THEATRE REVIEW by Stuart R. Brynien