So, are you the type of person who likes to try new things, different places and foods, perhaps? And how about walking from 102nd Street on the Upper East Side all the way down to the 59th Street Bridge?

Are you serious? Really? You and I could be friends, then… Because this experience is a lot more fun when you’re accompanied; trust me, it’s a long walk!

A friend of mine – Allen Hubby – and I took the Third Avenue bus from Midtown East to 103rd Street. From there, we walked up a hill to Lexington Avenue, where Moustache is located. It’s an amazing restaurant in that (weird) part of the city. Even though it looks scary, it’s safe at daytime – I guess East Harlem has been changing for the better for a while now. My friend was feeling a little uncomfortable in the beginning, but I had been there before, so I knew we’d have an excellent time. Which we certainly did, it was a great Labor Day experience.

Moustache is a very good restaurant located right atop the hill. You’ll see it from afar, and you’ll know it’s a good restaurant before you walk in. Due to its location – if only all Midtown were like it when it comes to low prices! –, the food would be considered cheap, to Midtown standards. But the quality isn’t low, it’s actually excellent. The feeling is amazing, “it feels like we’re at some restaurant at the southern tip of Spain, from where we could almost see Africa”, was my remark. And they played Brazilian Bossa Nova, for some reason, perhaps because they like that genre of music. From up there, unfortunately, you don’t have a nice view of the city – nor a bad one –, it’s just plain. Except for the twin buildings across the street, past the gas station. I looked at those buildings the entire time we dined. (I did look at other guests too, because I like to flirt, I have to admit!)

Well, we actually had late lunch, so we started off with hummus and tabouleh as appetizers, and for main course we shared a lamb shish kebab platter.  I don’t remember ever eating a lamb shish kebab worth talking about for a whole day. Perhaps because it’s still fresh on my mind today… or perhaps it was really so delicious! Only time – or my friends – will tell, if I keep bringing up the subject within the next couple of days or weeks.

Sadly to my understanding, and to my unwillingness, we left Moustache, and went on to burn the calories we gained sitting there for about an hour – not to mention we had a couple of beers with our meal! So, down the hill back past Third Avenue, all the way toward the East River; it doesn’t take long before you get to it. (The streets are not pretty. Thus, I recommend you walk very fast so you don’t get depressed!).

Done with the ugly part, you’re now finally by the river. Before you get to theriver, of course, you’ll have to cross a bridge, which is above the highway – probably the FDR. Once you get there, you’ll have so much fun, it’s really amazing. You’ll see other people walking fast and/or running, people walking their dogs, people playing with their children.  After your first 15 minutes of walk, you’ll get to see the mayor’s house – where Michael Bloomberg does not live, because he has his own townhouse somewhere else in the Upper East Side. But it’s worth hanging out there and seeing the nice houses and trees. 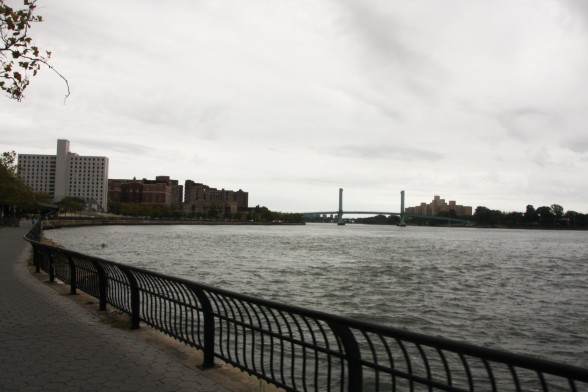 Now you’ll take a long walk again near the river, where you’ll be able to see ships, seaplanes and sailboats. As you keep going forward, you’ll walk past the building in which Gloria Vanderbilt’s apartment was located when she was a child and considered the wealthiest heiress of her time.  (In case you’re unaware of this, she’s Anderson Cooper’s mother.)

Many, many minutes later you’ll finally reach the 59th Street Bridge – officially called the Ed Koch Queensboro Bridge. From there you can take the tram, for a higher view of the city. It costs a subway swipe, and it’s a lot of fun.