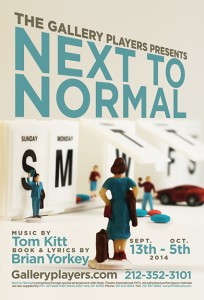 One of my favorite musicals–Tom Kitt and Brian Yorkey’s Next to Normal, a heartbreaking drama about a family haunted by death, baffled by life, and unable to deal with either–is currently being revived by the Gallery Players in the Park Slope section of Brooklyn.

It’s worth the trip.

The plot revolves around Diana, a deeply troubled housewife and mother on the south side of 40.  Her problems become apparent very early on–all is not as it appears to be in the Goodman household, to say the least–and before long she is switching psychiatrists, popping mouthfuls of meds, and (in one of the evening’s more gut-wrenching scenes) undergoing electro-shock therapy, with predictably chilling results.

Does Diana get better? Does her family learn how to cope with her illness? Do she and her daughter–an emotional wreck in her own right–learn how to cope with each other? Composer Kitt and librettist/lyricist Yorkey keep things real and painfully honest; there are no cut-and-dried answers here, no (wholly) happy endings.

Carman Napier is fine as the lead and sings like a dream; Chris Caron as her loving but flummoxed husband has the singing and (for the most part) acting chops but seems just a tad too young for the role; Lindsay Bayer as her daughter Natalie, John Wascavage as Natalie’s new boyfriend, Henry, and Benjamin Sheff as Diana’s shrink, Dr. Madden (the only funny moment in the show is when Diana, meeting the doctor for the first time, “sees” him as a kind of oversexed rock star) all turn in believable, and occasionally even touching, performances; and Luke Hoback practically steals the show (most of all when he’s cutting loose on the guitar-driven, rock ‘n roll vocals) as Diana’s son, Gabe.

Among the musical numbers (and there are well over 30 of them; it’s nearly an opera) I Miss the Mountains, You Don’t Know, I Am the One, and–of course–the show’s signature song, I’m Alive, are just a few of the standouts; it would be hard (no, make that impossible) to experience any of them without shedding a tear or two.

Kitt and Yorkey have since gone on to pen the Broadway musical If /Then.  It was Next to Normal, however, that put them on the map–and it’s easy to see why.

(NOTE: Brooklyn’s Gallery Players are at 199 14th Street between 4th and 5th Avenues.)