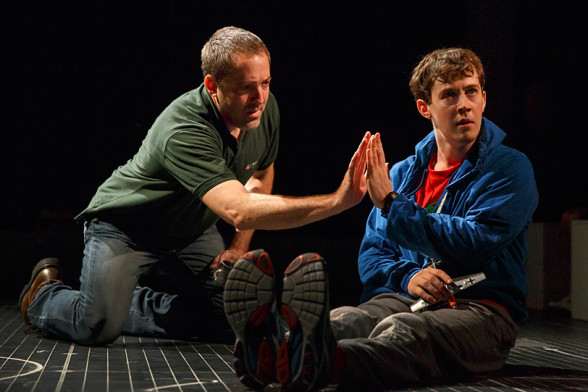 The Curious Incident of the Dog in the Night-Time lands triumphantly on Broadway after a successful run both at the National Theatre and the West End. Adapted by Simon Stephens from Mark Haddon’s novel of the same name, the play follows Christopher Boone as he begins to investigate why his neighbor’s dog has been murdered and subsequently unravels secrets that have been kept from him by his father. Christopher, who is somewhere on the autism spectrum, writes about his investigation for his teacher Siobhan and she encourages him to continue to write about what’s happening. Of course, as often happens when people write down things that they aren’t supposed to being doing (especially teenagers with protective parents), he gets in trouble with his father. But with his curiosity piqued and the mystery still unsolved, he continues to search for the truth, which sends him down the rabbit hole of discovery where he learns family secrets, travels outside of his hometown alone for the first time and ultimately defies everyone’s expectations of him.

The play has been directed impeccably by Marianne Elliot and features movement by Stephen Hoggett and truly ingenious design by Bunny Christie. The box of the stage becomes a chalk board, a neighborhood, a model train set, an escalator, and the representation of Christopher’s inner experience all with videos and projections (by Finn Ross). The cast are terrific; in particular, Alex Sharp as Christopher whose physicality and vulnerability are affecting and effective.

What’s truly breathtaking about the show is how the elements of stagecraft inform Christopher’s experience of the world around him and how we as the audience experience that alongside him. The utter spectacle of the show highlights the ways in which our world can overstimulate, while also making us complicit in the ways in which we fail to understand people who see the world differently. There’s a really clever meta-theatrical device that is added to the play about halfway through that seems like an inside joke to the audience, but ends up really paying off at the end. It should also be noted that there are a couple of very much alive animals that join the cast onstage and add to the authenticity and humor of the play.

The Curious Incident of the Dog in the Night-Time is contemporary British theater at the absolute top of its game. Stephens and Elliot have done such an intelligent and creative adaptation that it feels inherently theatrical despite its source material. It’s funny, charming, terrifying, thoughtful and entirely integrated and coherent as a piece of theater.