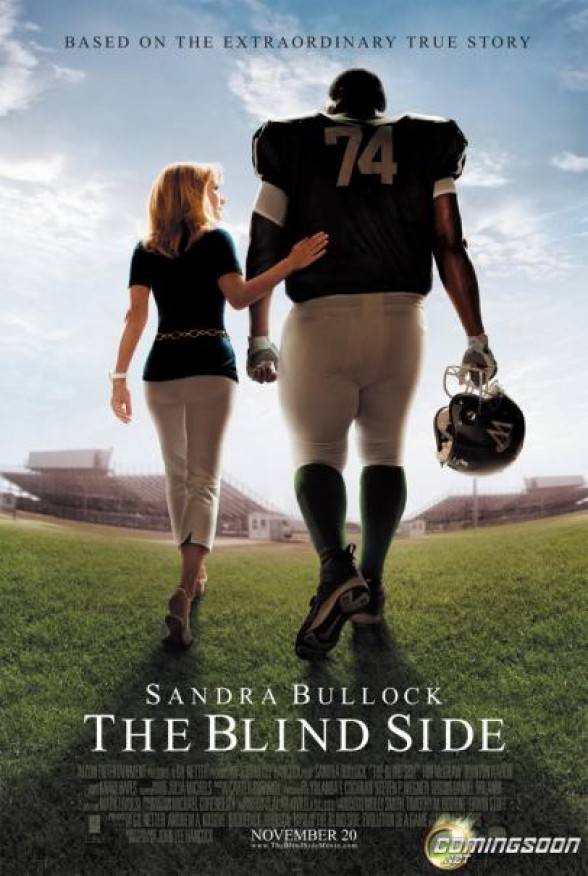 We wish we could tell you that we were blindsided by “The Blind Side”, that we went in expecting to see one of those syrupy-sweet, feel-good movies, and ended up seeing something else.
.
We wish we could… but we can’t.  It was, regrettably, as soft around the edges as we thought it would be.
.
Sandra Bullock stars as Leigh Anne Tuohy, a Memphis mom leading a life of privilege who, while riding around one day in the family SUV, comes across “Big Mike” Oher shambling along in his oversized polo shirt and baggy shorts.  Big Mike is a tall, oafish black kid whose guardian has just cajoled the nearby high school’s football coach into letting him try out for the team.  The catch: the kid’s reading and writing skills are so poor, he might not be allowed to.
.
Cue the standard movie-of-the-week montage: before you can say “do-gooder”, Leigh Anne is reading children’s books to Big Mike (or Michael, as he prefers to be called); she’s welcoming him into her family, and later adopting him, thereby officially making him one of her own; and her little boy, S. J., is putting his brand-new big brother through a grueling daily exercise regimen to help make him the best athlete he can be.  (As much a gridiron fan as his dad or Leigh Anne herself, he even outlines plays for him on the kitchen table using whatever odds and ends he can find, reminding us of one of those old-fashioned tabletop football games of years ago.)
.
Michael not only makes the team, of course, but pretty soon — after his adopted mom, whom he listens to more than his coach, toughens him up a little — he’s tossing opposing linemen around the field like so many rag dolls and exchanging high-fives after nearly every play.  College coaches come calling — here, writer/director John Lee Hancock trots out an impressive line-up of real-life football legends (impressive, that is, if you’re a college football fan from down south) in one stilted cameo after another.  Problems arise when a) the NCAA begins to suspect possible recruiting violations, b) Michael has to get his grades up again (bad grades mean no diploma, and no diploma means no college), c) he runs away, frustrated, and… well, you’ll have to plunk down your own ten dollars to find out what happens next.
.
Kudos to Bullock; she’s fine.  With her frosted blonde hair, steely determination, and soft southern drawl, she gives the role of Leigh Anne Tuohy just the right amount of believability — even a bit of an edge.  She IS Leigh Anne: southern belle, fiercely protective mom, and champion of the underdog.  Country singer Tim McGraw — minus the cowboy hat and superstar swagger, and sporting one of the dorkiest big-screen haircuts we’ve seen all year — is also very good, in a low-key kind of way, as Leigh Anne’s ultra-tolerant husband.  And the kids — Jae Head and Lily Collins — are fine, too, although Head is sometimes too cute and precocious for his (and the movie’s) own good.
.
The real hub of the movie, though, is Michael — and as portrayed by game newcomer Quinton Aaron, he never has much to say or do.  For most of the film, in fact, he just seems to be absorbing it all — Leigh Anne even brags, at one point, that he can learn anything he sets his mind to because he’s such a good listener.  It’s as though he’s storing everything away for future use, and is unwilling to say or do anything until he’s good and ready… whenever that is.
.
The result: Michael is criminally underdeveloped — a cipher.  We should care for him, be willing to root for him; we should be be moved by his struggle to overcome the odds and make something of his life.  But we aren’t, and that’s a shame.
.
Blindsided by “The Blind Side”?  Hardly.  It was precisely the sort of “after-school special” we were afraid it was going to be.  Now, if the story had been about the football player, and not the woman who appointed herself his guardian angel so that she could save him from himself… maybe it would have been better.
.
Want to see a run-of-the-mill screen version of the inspiring, real-life story of Leigh Anne Tuohy and Michael Oher (they’re real, alright; she still lives down south, and he’s currently playing in the NFL)? See “The Blind Side”.
.

But if you want to see a vastly superior film about ANOTHER large, black, inarticulate teen…
.
Spend your money on “Precious”, instead.
.
FILM REVIEW by Stuart R. Brynien