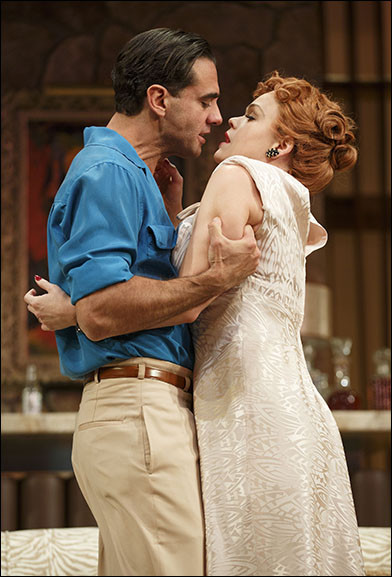 “The Big Knife” — the Clifford Odets drama enjoying its first Broadway production in more than sixty years — is about success, failure, sacrifice, compromise, husbands, wives, infidelity … and all of it against the backdrop of post-World War II Hollywood, when studios owned actors, actors owned our hearts, and there was more backstabbing going on than in your typical neighborhood street fight.
.
Bobby Cannavale plays Charlie Castle, a handsome young actor (an “American institution”, someone calls him, buttering him up) at the end of his rope: his wife is threatening to leave him for good, he hardly ever sees his son, his studio chief is dangling another fat contract in front of him that he doesn’t want to sign, and–worst of all–a tragic incident from his past has not only come back to haunt him, but may destroy everything he’s worked for, and quite possibly land him in jail.  The decisions he makes, the actions he takes–some wise, some foolish–are the backbone of this meaty drama, as the confused and conflicted Charlie fights to reclaim his soul.
.
Cannavale is fine: smiling and teflon-coated in one scene, prickly and volatile in the next.
.
Even better is Richard Kind as Charlie’s boss, the Machiavellian studio head, Marcus Hoff.  Eschewing his usual nebbishy TV persona (he’s still a nebbish, but a nasty one), Kind is excellent, scheming, cajoling, manipulating Charlie like a puppet. Also excellent is theatre vet Chip Zien, who breathes life (and, ultimately, fire) into the role of Nat, Charlie’s agent, who is part father figure, part confidant, and all bulldog.
.
Reg Rogers as Hoff’s sinister assistant Smiley, C.J. Wilson as Charlie’s stalwart best friend Hank, and Billy Eugene Jones and Joey Slotnick as, respectively, Charlie’s servant Russell and sad-sack pal Buddy (who harbors a few secrets of his own that could bring Charlie’s world crashing down around him) also turn in fine work.
.
Marin Ireland as Charlie’s wife Marion is, for much of the play, too quiet, too low-key, too calm; in a minor role, Rachel Brosnahan sparkles as the girl who holds the key to Charlie’s future, the pretty, young, and oh-so-tipsy Dixie Evans; and Brenda Wehle as a ruthless gossip columnist, plus Ana Reeder as Buddy’s wife Connie, who has been lusting after Charlie for years (sometimes successfully), perform ably, as well.
.
Director Doug Hughes builds the action to a powerful climax, and the living room set by John Lee Beatty, with its sofa, chairs, bar, and card table–along with the costumes by Catherine Zuber–are perfectly evocative of 1940s Tinseltown.
.
“The Big Knife” may be a bit of a relic, but its timeless themes and bare-knuckle attacks on the Hollywood establishment make it as relevant today as ever.  See it.
.
THEATRE REVIEW by Stuart R. Brynien