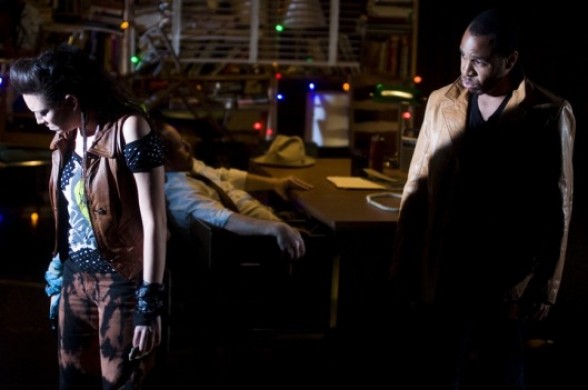 Derek Ahonen’s “The Bad and the Better” features a motley group of Occupy Wall Street-inspired urban anarchists, undercover cops, obsequious (and oversexed) secretaries, unhappily-married private eyes, vengeful siblings, corrupt politicos, murder, mayhem, and betrayal — in other words, more than enough characters (and plot) for an entire season of “Dallas.”
.
It’ll also make you want to reach for an aspirin — or an Alka-Seltzer.
.
The story revolves around Venus, a sour-faced and oh-so-serious anarchist playwright, who is really (I’m not giving anything away here; it’s revealed early on) NYPD undercover cop Chuck Lang, assigned to infiltrate the ranks of a protest group that the city has had its eye on for awhile.  Foment feelings of violence among these malcontents, the reasoning goes, and the whole sorry lot of them could be hauled off to jail in one fell swoop.
.
Meanwhile, Chuck’s brother Ricky — an alcoholic, sad-sack gumshoe working out of a modest little office way out in the middle of nowhere — is trying to get his own once-legendary cop career back on track. (He shot three kids back in the day, and became quite the gunslinging hero after that — at least among his fellow men in blue.)
.
In addition to THAT, there are volatile wives, horny girlfriends, lovestruck teens, fast-talking feds, clueless elected officials, Machiavellian movers-and-shakers… and a veritable fusillade of twists and turns that (finally!) arrive in Act II, and were probably intended to give the whole affair a noir-ish look, but really just amounted to too little, too late.
.
The acting ranges from realistic to histrionic (and has no emotional resonance at all), the direction by Daniel Aukin from stylized to (many scenes aren’t played face-to-face, but straight at the audience) uber-stylized.  The ending is a head-scratcher (there were so many things going on that somehow the principal baddie’s role in it all kind of got lost in the shuffle), and, by the time the lights went down, keeping everyone straight without the proverbial scorecard had proven to be an exhausting experience.
.
At least Alfred Schatz’ set — a cop bar, a cluttered bookshop, a threadbare office — were nicely detailed.  I don’t know; maybe “The Bad and the Better” would have worked… well, better as a movie.
.
As a play, it was just plain bad.