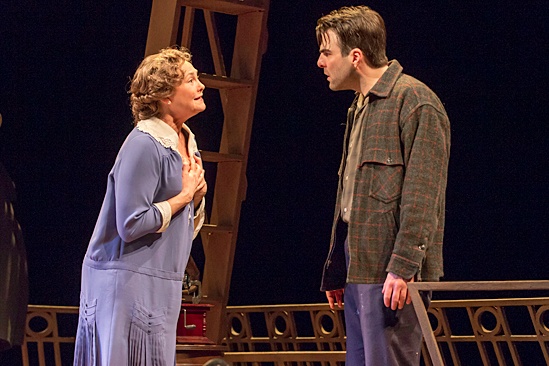 The term “memory play” is thrown around an awful lot in dramaturgical circles and Tennessee Williams’ The Glass Menagerie which opened in Chicago almost 70 years ago, in the middle of World War II, always seems to be the one that is pointed to as the most obvious example. The play opens and closes with Tom’s narration from elsewhere, but the play is set in an apartment (and a fire escape) in St. Louis that has bursts of Southern elegance and myopia.

In John Tiffany’s production on Broadway, which arrives by way of the American Repertory Theater at Harvard, Tom’s assertion that he’s a magician is manifested in creative ways. The set is naturalistic, but the way the actors use the space is not. Once again Tiffany is working with Steven Hoggett whose work on Broadway has been seen in Once, Peter and the Starcatcher and American Idiot. Known best for choreography that is more about movement than dance, his influence on this production is profound. Each character has a specific action or two that leads them through the play. These break the naturalism of the play and remind the audience that what we are seeing is a version of a reality, a distortion of reality.

The cast is an outstanding ensemble. Zachary Quinto’s Tom is equal parts sardonic and apologetic. His sympathy for his sister Laura is there, but not enough to change his own future. Cherry Jones’ Amanda is a powerhouse, a relic of the Southern past that blusters onstage and has overshadowed her children for their entire lives. The moment she comes onstage dressed for dinner with The Gentleman Caller is hilarious and sad at the same time. Celia Keenan-Bolger’s Laura is harder to pin down. She’s determined and embarrassed at the same time. Her scene with The Gentleman Caller is truly uncomfortable to watch because it’s so excellently rendered. Brian J. Smith rounds out the cast brilliantly, adding some clever nuances to a character who can be easily cast in a certain light. His friendship with Tom is genuine, but he also seems to be very much like Amanda, he is desperate to receive attention that he feels he deserves. He doesn’t break Laura and her unicorn out of malice or inattention, but because he needs to be the most interesting person in any room and he can feel that way when he’s with Laura. The discovery of this moment is painful and moving.

It’s a wonderful thing to see a starry revival that feels worth the hype. And it’s a testament to some of the fantastic work that’s being done at regional theatres around the United States and the cultivation of visionary directors and the creative use of physicality.