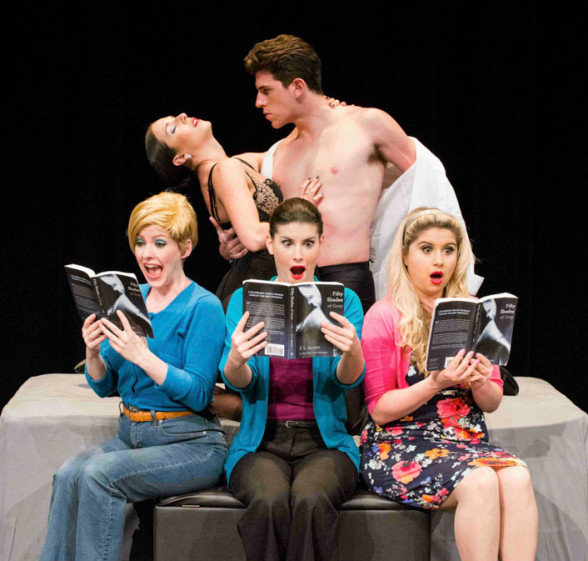 It is, in short, quite enough to turn even the most hardened hooker Fifty Shades of Red.

If, like me, you haven’t read the E. L. James novels, the story goes like this: when the pretty but woefully inexperienced Anastasia Steele agrees to interview mysterious moneybags Christian Grey as a favor for her boozy journalist roomie, it seems, at first, like an easy assignment. What could go wrong? Soon, however, the sparks start flying, Grey, who lives alone, is ushering Anastasia into his bedroom, and…well, you can imagine the rest.

50 Shades! is one of those ultra-raunchy parodies in which some of the song titles are so down-and-dirty that they’re not even listed in the program: “I Don’t Make Love, I ****” speaks for itself, while “We’re Just Like Any Other Couple” would have made a lovely romantic ballad–it’s well-sung (all the songs are) and wonderfully melodic–if not for the jaw-droppingly filthy sexual references, and the dog collar that a clueless Anastasia is wearing around her neck.

The acting is as broad as you’d expect, but quite good, chiefly from the book-loving housewives (Kaitlyn Frotton, Chloe Williamson and Ashley Ward, one of the co-writers) that “introduce” us to the action, to Tim Murray (channeling his inner Antonio Banderas) as the lovestruck Jose, to Christian and Anastasia themselves.  This is a parody, so Christian is not the dreamy stud depicted in the novels, but instead the insanely talented and extremely funny Chris Grace, who, with his doughy face and enormous gut looks like anything BUT a sex machine–even though, in his mind, he most definitely is.  And Amber Petty as Anastasia, with her sparkling smile, wide, innocent eyes, and–most notably–powerful singing voice, is every bit his match.

“50 Shades! The Musical” may not be for everyone, but if you’ve read the books–and even if you haven’t–it’s worth a visit.

Who knew sado-masochism could be so funny?