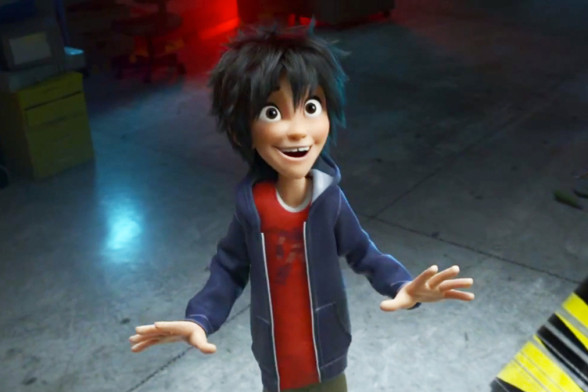 Hiro–the aforementioned whiz kid–is a robotics genius more interested in hustling mean-looking grown-ups out of their dough at down-and-dirty ‘bot-fighting matches than practically anything else…until, that is, his equally brilliant older brother takes him to the university “nerd lab” where he works, and suddenly, Hiro wants to work there, too. He builds some “microbots” to win over his brother’s boss, Professor Callaghan, everyone is suitably impressed, something terrible happens that sends Hiro into a deep, dark funk, he discovers an abandoned warehouse that is secretly a microbot manufacturing facility, and soon all hell–fueled, of course, by the requisite battle of Good vs. Evil–breaks loose.

Ryan Potter as Hiro, Scott Adsit as the lovable Baymax–his personal robot (or “softbot”) companion and his brother’s most remarkable invention–James Cromwell as Callaghan, and Alan Tudyk as Callaghan’s arch-rival, Alistair Krei, are wonderful.

But it’s “BH6″‘s look, its vibrant palette, its adrenaline-filled action sequences that really catch the eye.  A breathtaking chase through the streets of “San Fransokyo”, the futuristic city in which the story is set; the bird’s-eye views of the city, with its roadways and skyscrapers and bridges; the long and thrilling battle royale that concludes the film (and offers up a twist or two that you won’t see coming): co-directors Don Hall and Chris Williams have put a heck of a lot up there on the screen, and it all looks great.

Big Hero 6 will bring a smile to your face–and your kid’s, too–whether you understand all the mindbending technology, or not.  (Heaven knows I didn’t.) It’s a comic book (in fact, an old Marvel comic book) come to life.

(My advice: Be sure to arrive early for the animated short that precedes the film, a delightful concoction that features the World’s Cutest–and Hungriest–Puppy.  And stay till after the credits for one final, COMPLETELY unexpected surprise–it’ll be worth it!) 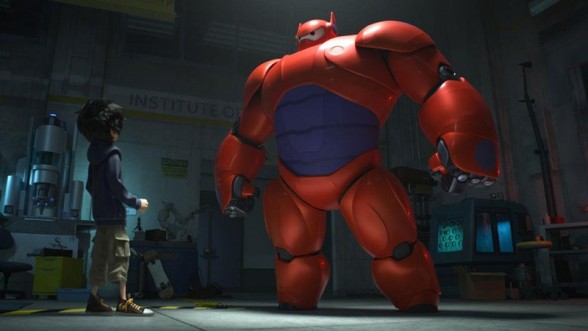