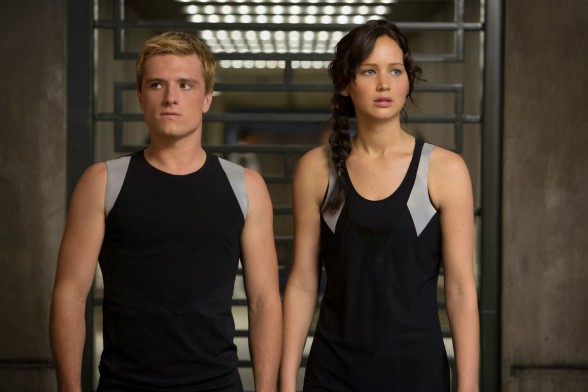 When we last saw Katniss Everdeen, she was fighting for her life–and nailing a hard-earned victory–in the ritualized teen-vs.-teen insanity known as The Hunger Games. 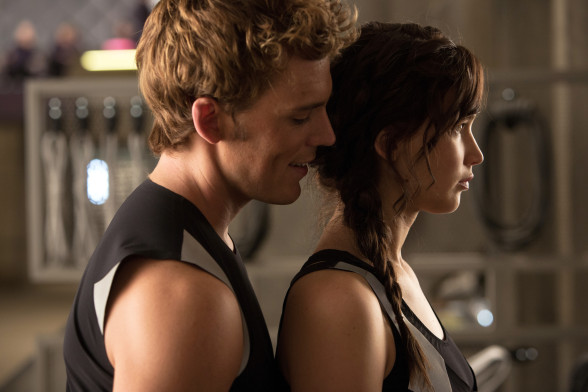 Now she’s back, and as The Hunger Games: Catching Fire begins, she’s being primped and primed for her victory tour, a tasteless spectacle requiring her to deliver state-approved speeches to enormous crowds–including, horrifyingly enough, the families of some of the teens she’s slain.  It’s a heartbreaking task, but she’s obliged to do it–her society is bound to the most grotesque traditions–and she thinks that’s the worst of it, until…
.
A visit from the President himself…a chilling ultimatum…a brand-new Games, in a new arena filled with even deadlier adversaries…director Francis Lawrence (replacing Gary Ross, who helmed the first film), packs a lot into “THG:CF”‘s two-and-a-half-hour running time, and it’s all mesmerizing.
.
Most mesmerizing of all, naturally, is Jennifer Lawrence herself, reprising her role as the indefatigable Miss Everdeen.  Displaying a welcome vulnerability that she kept under wraps for too much of Part I, Lawrence commands the screen once again, whether by allowing the camera to photograph her in the most intense (and intensely personal) close-ups, or fleeing yet another manufactured menace along with her band of brothers (and sisters).  Josh Hutcherson and Liam Hemsworth do serviceable work as the men in her life, the loyal and lovestruck Peeta and her boyfriend back home, Gale; Woody Harrelson is his old reliable self as Katniss’ mentor, the grizzled and perpetually hungover Haymitch; and even Elizabeth Banks gets past all the goofy glitz and shows some genuine feeling as their chaperone, the garishly-costumed (and -coiffed) Effie Trinket. Stanley Tucci as the toothsome TV host is as grating as ever, rocker/actor Lenny Kravitz has a quietly effective moment or two as Katniss’ laid-back costume designer, and stage and film vets Jeffrey Wright and Amanda Plummer, newcomers both, do fine work as a pair of fellow contestants.
.
It is, however, the masterful pairing of Donald Sutherland as President Snow (much more prominent here than in the first film) and Philip Seymour Hoffman as his gamerunner that gives “THG:CF” its edge.  Sutherland, in full villain mode, grins like a shark and chuckles like the devil, while Hoffman hides enough malice and treachery (as well as one or two VERY big secrets) beneath his casually rumpled exterior to make him Sutherland’s equal in every way.
.
There’s an unfortunate sameness to the movie–having not ready the Suzanne Collins sequel, I didn’t know so much of the action would take place in largely the same kind of dar, densely-wooded forest–but no matter: “THG:CF” is a breathtaking piece of filmmaking.
.
Can’t wait for “THG3”.
.
FILM REVIEW  by Stuart R. Brynien