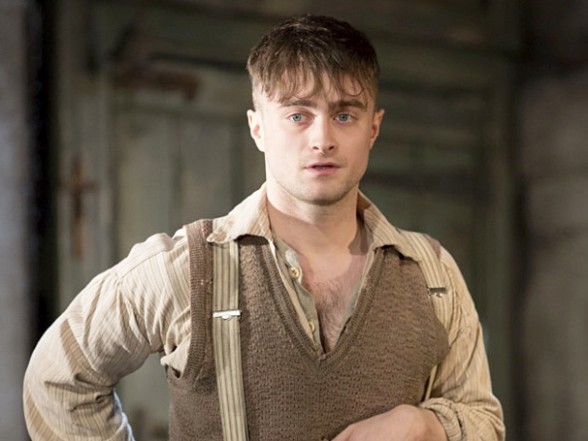 You’ve got to hand it to Daniel Radcliffe: he set out to distance himself from his days of witchcraft and wizardry and, by Hogwart’s, he’s done it.  First came How to Succeed in Business Without Really Trying…then Equus…then the film version of The Woman in Black…and now he’s back onstage, in a revival of Martin McDonagh’s very funny–often darkly so–The Cripple of Inishmaan.
.
Radcliffe plays Billy–known to one and all, even his doting aunts, as Cripple Billy–a young man on the western coast of Ireland who spends his days devouring books, staring at cows, and longing to get away.  When a big-time American filmmaker arrives to shoot a documentary, Billy senses an opportunity.  So what if he’s never acted before? So what if he has a lame left arm and a useless left leg? So what if he no sooner mentions his dreams of stardom to Helen, the fiery redhead he’s had his eye on for years, then she mocks him and laughs in his face? When Billy has a chance to meet the director, he grabs it.  What happens next, and how his brief time away from home affects those he left behind, is what McDonagh’s play is about.
.
Radcliffe’s performance is fine, if a little understated; aside from his portrayal of Billy’s affliction, he is all earnestness and innocence, and little else.  A moment of passion, a burst of anger or frustration here or there, would have been welcome. But Radcliffe offers none of that; a pity.
.
Faring better–though admittedly in showier, more fully-realized roles–are Pat Shortt as the ruddy-faced town gossip, Johnnypateenmike; June Watson as his arch, booze-swilling Mammy; Sarah Greene as the nasty, mean-spirited (but somehow likeable) Helen; and Gillian Hanna and Ingrid Craigie as his loving, worried, oft-times exasperated aunts.Director Michael Grandage (working with the same company that performed the play to great acclaim in London last year) keeps the action and zingers flowing like smooth Irish whiskey; the sets by Christopher Oram–the aunts’ sparsely-furnished general store (you’ve never seen so many cans of beans in your life!), the barren, craggy shoreline, a no-frills bedchamber and fleabag hotel room–are terrific; Oram’s costumes (the play is set in 1934, when a famous director actually did travel to that part of the world to shoot a film) are spot-on; and the lighting by Paule Constable captures the subtly shifting moods perfectly.
.

The heavy Irish accents can be awfully hard to understand at times, and, of course, it’s too bad that Grandage (and McDonagh) didn’t give Radcliffe more to work with, but no matter.

The Cripple of Inishmaan is slated to run through July 20th.  Spend some time with these fine Irish eccentrics while you can. 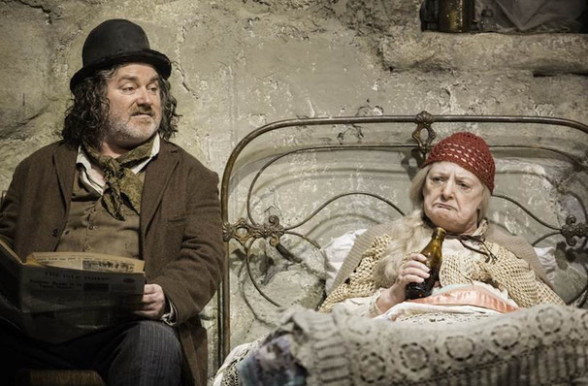 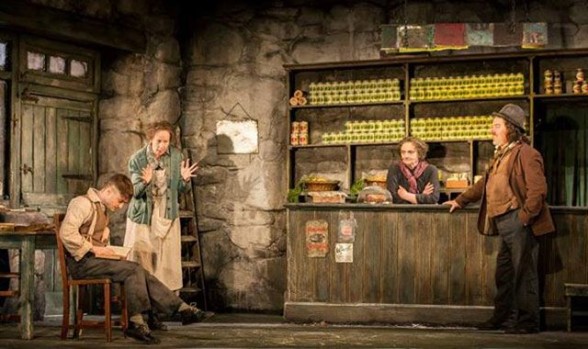