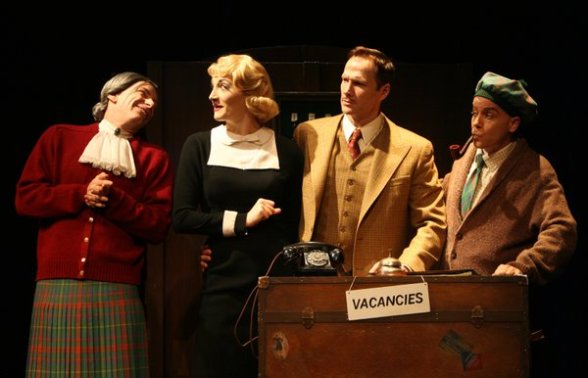 Never mind the “39” in the title–try these numbers on for size:

Yep, a mere 4 actors play that many parts over the course of an hour-and-a-half of sheer, unbridled zaniness in Patrick Barlow’s “The 39 Steps“, now at the Union Square Theatre after a successful run on Broadway.

The plot–in case you’re unfamiliar with the 1935 Hitchcock film or the British spy novel that inspired it–goes like this: bored Brit Richard Hannay attends the theatre one night and meets a mysterious femme fatale who claims she’s being pursued by killers.  No sooner do they return to his modest London flat than she is (of course) promptly murdered. He runs off–barely a step ahead of the police (he’s the primary suspect) and the killers themselves–hightails it to Scotland, where he squares off against a suave Nazi sympathizer, falls in love (yes, there’s a dash of romance here, as well), gets shot, keeps running, and–along the way–makes any number of daring, hair-raising escapes.

It’s quite enough to leave you breathless–and quivering with laughter.

Robert Petkoff as Hannay was hilarious, and (it seemed) never, ever stopped moving; and Brittany Vicars as the femme fatale and, later, Hannay’s love interest, plus a couple of other characters, was delightful.

The real chameleons, though–and listed in the program only as Clowns 1 and 2–were Arnie Burton and (stepping in for Billy Carter at the performance I attended) Daniel Harray.  Burton–so brilliant in Charles Ludlam’s “The Mystery of Irma Vep” not too long ago, and an old hand at this sort of mischief–is a quick-change master, with a talent for accents, a rubbery face, and the timing of the born comedian.  Harray, a gifted performer in his own right, was every bit his equal.  Together, they played cops, spies, farmers, Nazis, doddering old men and nubile young ladies. (Was there anything they DIDN’T do well? In a word: nein.)

Director Maria Aitken kept the Monty Pythonesque mayhem rolling right along, the sets by Peter McKintosh (which proved that you CAN mount an entire movie on stage, even a chase-filled Hitchcock classic, without getting too elaborate) were primitive (often hilariously so) but eminently serviceable, and everything was helped nicely by Kevin Adams’ lights and McKintosh’s simple (here a hat, there a coat, elsewhere a headscarf for the farmer’s daughter) but effective costumes.

Exactly what is “The 39 Steps“, by the way? As one of the characters revealed toward the end, it’s a secret spy organization.

Oh, have I given too much away? Hardly; it’s the journey toward the “big reveal”, after all–the whole madcap journey–that makes this show so worthwhile.

Hold on to your seat–or even the person next to you–and enjoy. 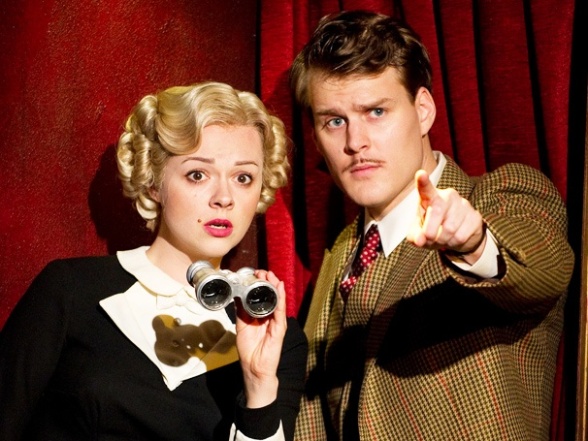