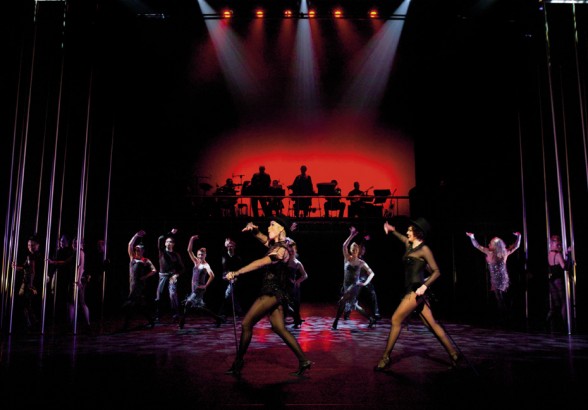 Right from the opening riffs of that musical theater classic, “All That Jazz”, the current production of “Chicago” — now in its fifteenth year on Broadway — had me hooked … just as it did when I first saw it years ago.
.
The story, for the uninitiated, takes place largely in a women’s prison, and all the hard-boiled husband (and boyfriend) killers are still present and accounted for, from ex-showgirl Velma Kelly to the pie-eyed Roxie Hart to all the venomous lovelies in between.  Amra-Faye Wright — all short, spiky hair and long legs — played Velma to perfection, Christie Brinkley, still stunning at fifty-seven, was charming (if a little lacking in the song-and-dance department) as new-girl-on-the-cellblock Roxie, and all the other gals were as fearsome (and, occasionally, even fearful) as ever.  (I certainly would have thought twice about cheating on any of them.)
.
Roz Ryan as prison matron “Mama” Morton, Brent Barrett as sleazy lawyer Billy Flynn, and Raymond Bokhour as Roxie’s sad-sack husband Amos were the other stand-outs in the excellent and hard-working cast.
.
John Kander’s music, and Fred Ebb’s marvelously clever lyrics, once again reminded me of how truly entertaining fine musical theater can be (and how much better “Chicago” is than most other shows): gems like “All That Jazz”, “Cell Block Tango”, “When You’re Good to Mama”, and “Mister Cellophane” — to name just a few — have become a part of the Broadway musical lexicon, and deservedly so.
.
It’s still a concert version of the show, just as it was when this revival opened years ago, with its bare bones set, minimal staging, and orchestra right onstage, but make no mistake — it is as exciting and eye-popping as ever, and Anne Reinking’s Fosse-inspired choreography is still a joy to watch.
.
“Chicago” remains a theatrical destination that — for theater lovers — should not be missed.
.
“WONDERLAND”
. 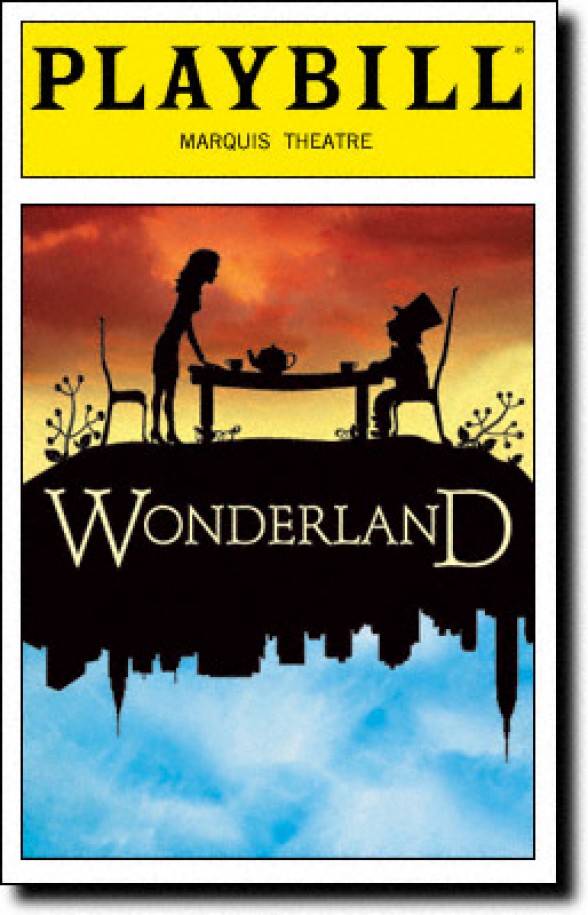 A less worthwhile destination was the Frank Wildhorn-scored “Wonderland”, which recently closed (understandably so) after an aborted month-long run at Broadway’s Marquis Theatre.  Here, Alice wasn’t a little girl, but a pert and pretty Manhattan mom; the Mad Hatter wasn’t played by a man, but a woman (?!) with her bitch dial turned up high; and the Chesire Cat seemed to be channeling, in the most stereotypical way, Antonio Banderos’ Latin-flavored Puss-in-Boots from “Shrek”.
.
The real problems, though, were the music and direction.  I’m a fan of Wildhorn — I enjoyed “The Scarlet Pimpernel” (in all its incarnations), and even “Jekyll and Hyde” — but here the music was bland and forgettable, Jack Murphy’s lyrics were lame and unimaginative (from first song to last, he eschewed the clever rhyme in favor of the trite and easy one), and Gregory Boyd’s direction was rote and predictable (a character appeared, delivered his defining song, and then blended in among the others while another of Alice’s new acquaintances took his place).  Even Marguerite Derricks’ choreography was sadly uninspired.
.
Was “Wonderland” colorful? Certainly; Susan Hilferty’s costumes and Neil Patel’s sets may safely be counted among the best things about the show.  Was it well-sung and — most importantly — entertaining? Well, yes; the big-voiced Morgan James, understudying for the lead, was terrific, and my nine-year-old sure seemed to be enjoying herself.
.
Unfortunately, that didn’t make “Wonderland” any less flawed … or any less of an exercise in mediocrity.
.
“SPIDER-MAN: TURN OFF THE DARK”
. 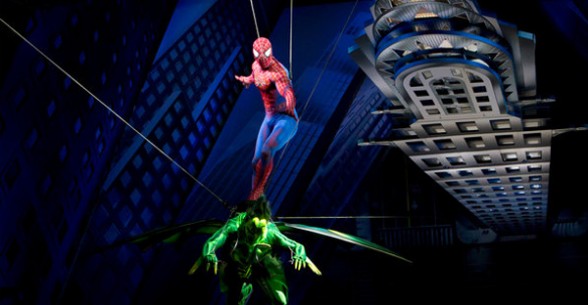 One of the problems with “Wonderland” was that its creators aimed low; there wasn’t a truly original moment in the entire production.  On the other hand, the creative team behind “Spider-Man: Turn Off the Dark” aimed high (and I’m not saying that only because of all the aerial acrobatics).  Did they always hit the mark? No; but at least they were brave enough to take some chances.
.
The story, of course, revolves around Peter Parker, a high school science nerd who, after being bitten by a spider — and suddenly finding himself with a spider’s strength and agility — turns himself into a costumed, web-slinging vigilante … much to the dismay of the evil Green Goblin, aka mad scientist Norman Osborn.
.
Will Spidey be able to prevent the Goblin from taking over the world? Closer to home, will he ever get anywhere with Mary Jane Watson, the beautiful redhead with dreams of stardom whom Peter has had a crush on for years?
.
There is much to like here: Matthew James Thomas, who plays the role of Peter Parker/Spider-Man at selected performances (I attended a late preview) was a strong and effective lead; Jennifer Damiano more then held her own as Mary Jane; and Patrick Page was delightfully over-the-top as the Goblin.  The score, by U2’s Bono and The Edge, grew on me after awhile (the one memorable song being the haunting ballad “Rise Above”), the sets, appropriately enough, were colorful and cartoony (there were a lot of them, too; it wasn’t only your friendly neighborhood Spider-Man flying down from the rafters every five minutes), and the aerial stunts were — and I don’t use this word often — truly awesome.
.
Did we really need Arachne, the mythological spider creature who kept reappearing as Peter’s guardian angel? Did the Sinister Six — the Goblin’s motley assortment of freakish-looking man-monsters — look sinister, or merely silly?
.
Minor quibbles, both.  Even the ending, abrupt as it was, didn’t spoil the fun.  “Spider-Man: Turn Off the Dark” is bold, exciting, and offers the kind of spectacle rarely seen in a Broadway theatre.
.
It should not be missed.
.
THEATRE REVIEWS by Stuart R. Brynien