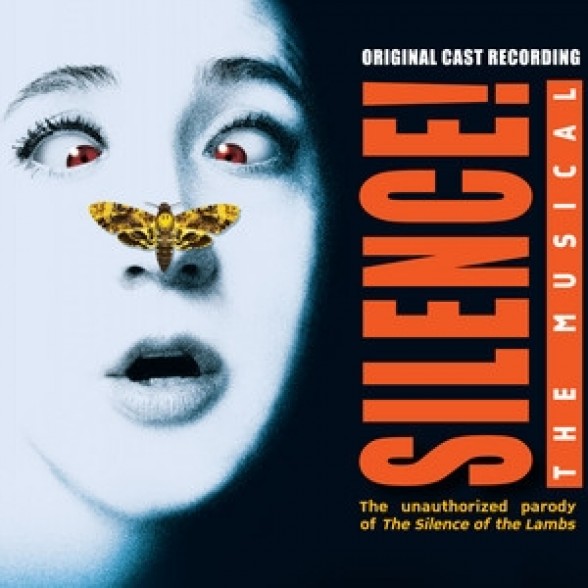 Relentlessly vulgar yet consistently funny, “Silence! The Musical” spoofs — to within an inch of its life! — the 1991 Oscar-winning horror classic, “Silence of the Lambs”.

The story, of course, focuses on young FBI cadet Clarice Starling, who is dispatched to a hospital for the criminally insane to interview the facility’s most notorious inmate: the erudite but oh-so-evil Hannibal Lecter. (The FBI believes he may be able to help them catch a killer.)

Jenn Harris plays Clarice with a mix of spunk and sass and newbie innocence; she even has a bit of a speech impediment, pronouncing (for one thing) “silence” as “shy-lence”. (Rarely, I am sure, has an onstage speech impediment produced as many belly laughs as this one.) Harris looks nothing like Jodie Foster — she doesn’t even sound like her, not really — but she does a spot-on send-up, nonetheless.

Her nemesis, the twinkly-eyed Dr. Lecter, is portrayed by stage and TV vet David Garrison. There’s no Snidely Whiplash-type moustache-twirling, no evil, villainous cackling here; much as Anthony Hopkins did before him, Garrison keeps a lot in reserve, preferring to display instead his quiet, cultured side. To Garrison’s credit, the heart of the cannibal that beats beneath generally stays WAY beneath. It’s a  controlled performance that is chilling — yet comical — in every respect.

The rest of the cast plays a variety of bizarre, over-the-top characters — doctors, nurses, fellow inmates — that will have you quivering with laughter, too.

And — oh, the songs! There’s a reason none of the song titles appear in the program. Hannibal’s “ode” to Clarice (which he even reprises!) is so incredibly vulgar — nasty, even — that I dare not mention any of  the lyrics by way of example. (Viva! is a family publication, after all.) Other ditties are just as naughty, just as risque. Yet — make no mistake about it — they’re all very, very funny; kudos to Jon and Al Kaplan, who wrote the music and lyrics, librettist Hunter Bell for his hilarious, profanity-laced book, and to director/choreographer Chistopher Gattelli for bringing the whole mad mess to life.