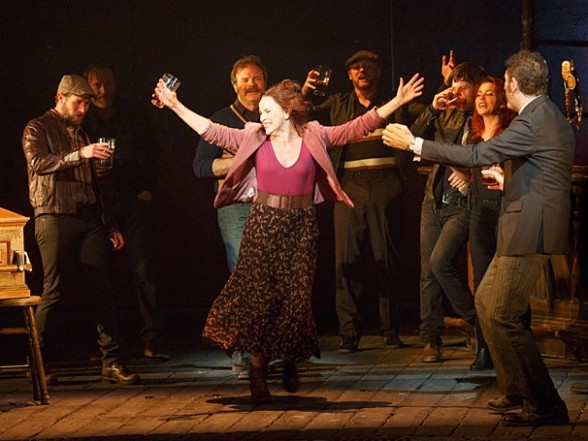 In the Sting-scored, Brian Yorkey-and-John Logan-scripted new musical The Last Ship, Michael Esper stars as Gideon Fletcher, a young man who leaves his town in Northeast England–and his girl–doesn’t (despite his promises) return for fifteen years, and discovers that his one-time sweetheart has both a new beau and strapping young son, and that the town’s once-thriving shipyard–its main industry–is about to be shut down for good.

In the bigger picture, The Last Ship is about the demise of the shipyard and the resulting blow to the town’s economy.  In a smaller, more intimate sense, however–and this is where the love story comes in, the romantic entanglement without which there wouldn’t be much of a plot–it’s about Gideon and Meg, and her new man, Arthur, and Gideon’s efforts to win her back.  Does he? And what of the son, a kid named Tom, who works at the yard himself? And can the men of the yard keep the place open, the machinery humming and the assembly line running, long enough to put together, for old time’s sake if nothing else, One Last Ship?

The working-class background is nothing new: we’ve seen stories like this before–the factory workers in The Full Monty and the miners in Billy Elliot come to mind.

But the shipyard angle, as familiar as it is, hardly qualifies as the show’s biggest problem.

That would be the score, with one number sounding much like another, one set of lyrics echoing the last.  Only When We Dance, a lovely ballad featuring Gideon, Meg and Arthur near the end of Act I, and Act II’s The Night the Pugilist Learned How to Dance, sung beautifully by Gideon and Tom, linger in the memory.  The rest of the score–some of it sounding like it might as well have been sung by Sting himself–has about it a sameness, a dreariness, an unrelenting melancholy.  (The only humor in the show, in fact, comes in the form of Father O’Brien, the local priest, a gray-haired old cleric with a penchant for prayer AND a pint.  As played by Fred Applegate, he’s a delight.)

The rest of the cast–fine actors, all–do their best to alleviate the monotony, particularly Esper, Rachel Tucker, and Aaron Lazar as the three sides of the triangle (Tucker herself is a real sparkplug), and Collin Kelly-Sordelet as the brave young boy longing to head out to sea.

Director Joe Mantello keeps the action moving smoothly, and set designer David Zinn (hampered somewhat by a palette that could have used a dash more color) manages to put us smack in the middle of a busy shipyard and noisy, crowded pub (the two principal settings) using a minimum of props and furnishings.

Now if only Sting’s music had a little more pizzazz.

As it is, once The Last Ship sets off, it threatens to sink beneath the weight of its sails.

(Note: The Last Ship is playing at the Neil Simon Theatre on Broadway.) 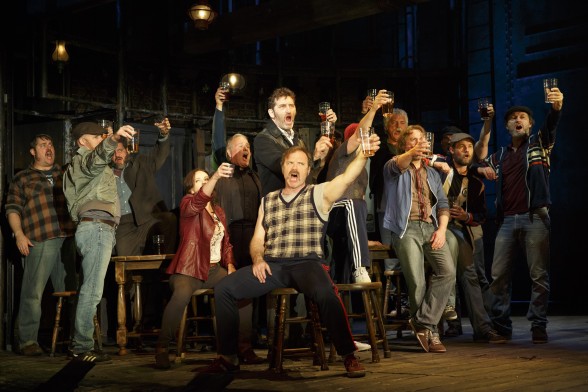