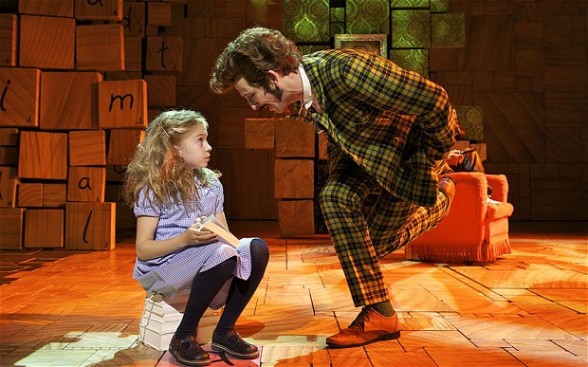 On Broadway, the trials and tribulations of downtrodden children are hardly anything new. “Annie”, “Mary Poppins”, “Billy Elliot” and “Newsies” quickly come to mind … and that’s just for starters.

Now we can add to the list the new musical “Matilda”, based on the book by Roald Dahl. Matilda must overcome obstacles on a daily basis, chief among them her classless, uneducated parents, Mr. and Mrs.  Wormwood (unable to fathom their daughter’s fondness for books, they keep asking, “What’s wrong with the telly?”), and the headmistress at her school, the cruel and tyrannical Miss Trunchbull, an imposing figure who looks like a linebacker and sounds like a drill sergeant and refers to her pupils as “maggots”, Matilda as a “gangster”, and feels no love for her kids whatsoever.

Aside from her pals — assorted classmates, boys AND girls, all of whom Miss Trunchbull has vowed to “crush” — the only person Matilda can turn to is her teacher, the young, idealistic Miss Honey, who sees the genius in Matilda and yearns to set it free. It’s a long road, filled with ruts and bumps and detours, and, at every turn, Miss Trunchbull herself, planted squarely and implacably in the middle.

The part of Matilda is a demanding one — she is onstage nearly all the time, speaking and singing and dancing — and, on the night I attended, Milly Shapiro (one of four actresses alternating in the role) was magnificent. Clearly, Shapiro is as prodigiously talented as Matilda is precociously intelligent. (How intelligent? She reads Dostoyevsky AND Dickens AND Dr. Seuss, knows her mathematical tables better than some adults, and spins long, fantastical yarns that even grown-ups enjoy.)

As her heartless and clueless parents, Lesli Margherita and Gabriel Ebert turn in wonderfully comic performances. (Ebert, with his rubbery face and loose-limbed gait, is particularly charming.) Lauren Ward as Miss Honey is more realistic, less cartoonish, and — thanks to some of the finest musical moments in the show — always touching.

As Miss Trunchbull, British actor Bertie Carvel (who originated the role in London) is terrific: frightening yet funny, domineering yet delightful. Dressed for the most part in a drab grey trenchcoat with impossibly square shoulders, a plain black skirt, plain white knee-highs that stop just short of a pair of knobby, unladylike knees, and sensible shoes — his hair pulled back inelegantly in a tight, no-nonsense bun — Carvel marches stiffly about the stage, dominating every scene he’s in. Very young children in the audience might want to hide under their seats — he truly is intimidating — but everyone else will have a grand time.

The ending is a bit anticlimactic (the expected showdown between Good and Evil — that is, Matilda and Miss Trunchbull — never quite materializes), and as for the second act intro of Matilda’s Carrie-like ability to move objects with her mind, couldn’t the writers have hinted at those powers earlier on?

But those are trifles. “Matilda” is a fine show, full of winning performances and theatrical flourishes and, not incidentally, laughs.

It might even make you look back on your own school days and decide that — compared to poor Matilda’s — they weren’t so bad, after all.

A quick shout-out to the late, lamented (at least to me) “Jekyll and Hyde”, which recently ended an aborted run at Broadway’s Marquis Theatre. I saw the show three times during its initial engagement back in the late 90s, and regardless of who was playing the good doctor — Robert Cuccioli, Sebastian Bach, or David Hasselhoff (yes, THAT David Hasselhoff) — I enjoyed myself immensely each time. “J & H”, I believe, is one of those shows that could star just about anybody and still be vastly entertaining. (Certainly, Hasselhoff wasn’t known for his acting and singing, and even HE didn’t spoil the fun.)

This latest production — “J & H”‘s first full Broadway revival — featured American Idol/”Rock of Ages” alum Constantine Maroulis, and after a shaky start as Jekyll (who was a tad too nerdy and geeky for me), he hit his stride and was on much firmer footing as the venomous and vengeful Hyde. (Let your hair down and ROCK it, Constantine!) It also helped that as the conflicted prostitute Lucy — the role that made Linda Eder famous — Deborah Cox underplayed her part every bit as much as Maroulis overplayed his, and grounded the show in the kind of gritty reality that all the gothic, over-the-top mayhem sorely needed. Her solos were spellbinding, her portrayal of Lucy spot-on. The spare set was functional if not eye-popping; Jekyll’s anguished battle with himself late in Act II was riveting. (So what if they used a projection of Hyde, instead of allowing Jekyll, as they did in the original production, to portray both sides of his tortured personality at the same time? Some critics pounced on that. I sort of liked it.) And the production itself, with its crowd-pleasing showstoppers, tragic ending, and Grand Guignol sensibility, was as enjoyable as ever.

Unfortunately, standing ovations (there were even one or two DURING the musical numbers!) don’t always translate into love from the critics, and this production was almost universally panned. Sure, composer Frank Wildhorn has his detractors (Hyde himself had fewer), but still: No Tony nod for Maroulis? And — especially — no nomination for the divine Ms. Cox?

I know I’m all alone here, but — really?