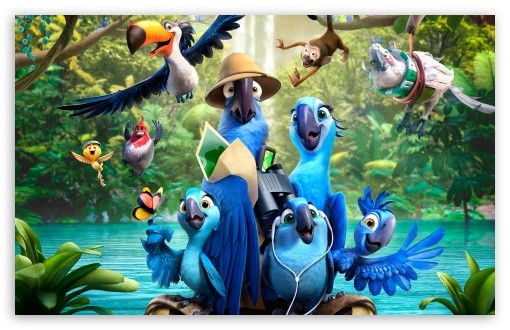 Lush tropical landscapes, heroic macaws, enough swinging music to heat up the dance floor at the hottest Rio de Janeiro nightclub–these are just some of the highlights of the gorgeously animated, and often very funny, Rio 2.
In this sequel to 2011’s Rio, returning macaw couple Blu and Jewel head off to the Amazon rainforest–all three of their kids in tow–to search for the mysterious colony of macaws that is rumored to be living there.  No sooner do they arrive than they meet Jewel’s long-lost father; Blu (like Jewel and the kids, a domesticated bird who has had it all too easy back home) must prove he’s capable of surviving in the wild; they come face-to-face with the movie’s chief villain, a greedy sort who’s tearing down huge chunks of rainforest for his own nefarious purposes; and…oh, yes, Nigel the Shakespeare-spouting cockatoo returns to settle a score with Blu.
The voice work is fine, particularly Jesse Eisenberg’s and Anne Hathaway’s as Blu and Jewel, Andy Garcia’s as her gruff, demanding father (sounding now and then like Robert DeNiro in full Meet the Fockers mode), and Jemaine Clement’s as the vengeance-minded but hilariously hapless Nigel.  Returning director Carlos Saldanha keeps the action (and there’s plenty of it, all kiddie-safe and fun) flowing smoothly, and the script includes enough jokes and sight gags for Mom and Dad’s amusement, too.
It’s the animation, though, that is the real treat here.  Bird’s-eye views of the jungle…soaring glimpses of the ‘scrapers and rooftops of beautiful downtown Rio…and, of course, the birds themselves, blue and red and every hue in-between, their eye-popping feathers in bold contrast to the nearly monochromatic greenery of their surroundings…Rio2 is an artist’s palette come to life.
Sure, the ending’s a bit pat, sometimes the plot seems as dense as the forest itself, and you might need a scorecard to keep track of everyone, but considering how beautiful it all looks, you–and especially your little ones–probably won’t even care.
FILM REVIEW by Stuart R. Brynien