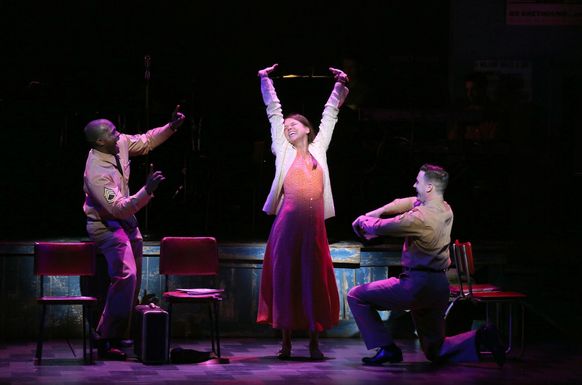 Roundabout Theater Company is reviving Jeanine Tesori and Brian Crawley’s 1997 musical Violet with Sutton Foster in the title role. Based on The Ugliest Pilgrim by Doris Betts, the musical follows a disfigured woman on a bus journey from the mountains of North Carolina to Tulsa, Oklahoma so that she can be made beautiful by a televangelist.

Set in 1964, Violet’s travels introduce her to two GIs, Monty and Flick. Monty is a charming womanizer and Flick is frequently discriminated against because he is black. She befriends them at a rest stop by playing poker with them and later they all have a night on the town in Memphis, where she flirts with both of them but spends the night with only one of them. She continues on to the televangelist where she is transformed, but not as she expected.

Sutton Foster is magnetic as Violet. The musical does not portray Violet’s disfigurement explicitly (we learn that she has a large scar across her face, the result of an accident with an axe), but uses flashbacks with younger Violet and her father to show Violet’s active imagination and the ways that she has learned to cope with her misfortune. Joshua Henry is heartbreaking and powerful as Flick, in particular in the gorgeous “Let It Sing,” a spiritual inflected with a military cadence. Monty, as played by Colin Donnell, is more complicated; occasionally revealing himself to be caddish, and yet also boyish and sweet.

Tesori’s score is gorgeous and lofty, with bluegrass- and gospel-inspired songs with strength and soul. Crawley’s book and lyrics are clever and yet sentimental. The stage resembles an old bus depot with the band taking up much of the upstage space, along the journey of the play, different neon signs light up to let the audience know where the bus is. It’s a simple set, but one that evokes the period and the place.

Violet, like the character herself, is imperfect. But what gives the show its charm and power are the surprises and the unevenness of the story. Rather than following the formula of a musical adapted from a film (though, this was originally adapted from a short film from the mid-80s), Violet allows the story to unfold in ways that are occasionally confusing and complex. Violet hits entertaining highs (the rousing gospel number in Tulsa is incredibly compelling, but doesn’t quite fit in with the rest of the musical) and has slower, softer moments, but the bus travels onwards and the audience is lucky to be along for the ride. 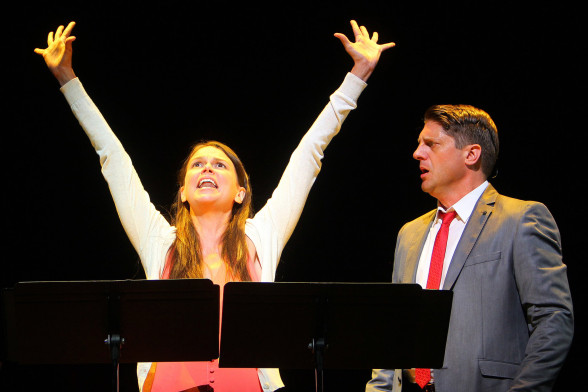