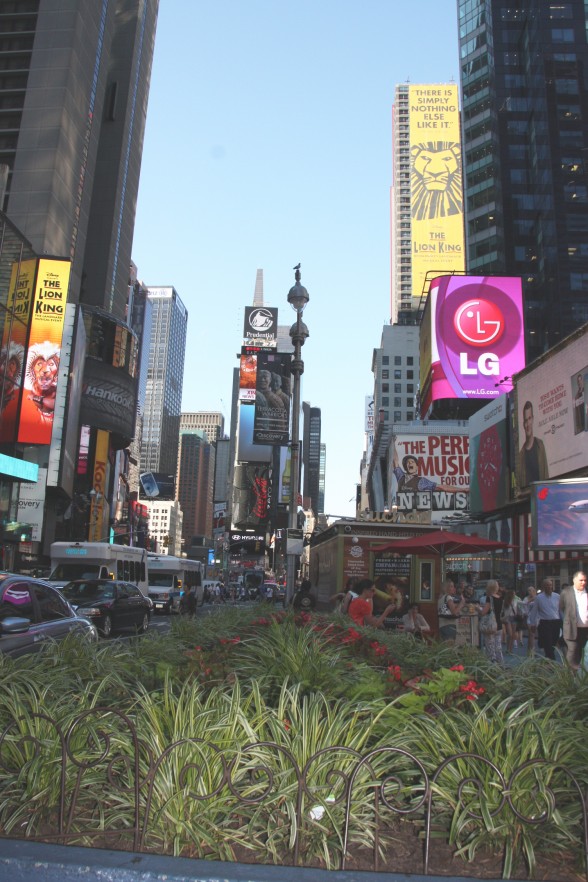 Stretching along Broadway and Seventh Avenue from West 42nd Street to West 47th Street, this mecca for locals and seemingly zillions of tourists is a smorgasbord of restaurants, fast-food joints, movie theaters, gift shops and, well, you name it… anyway you look at it, it epitomizes “The City That Never Sleeps.”

Once called Longacre Square, there’s never been a shortage of activity since it was re-named Times Square back in 1904 when Teddy Roosevelt called the White House home.  Publisher Adolph Ochs had moved The New York Times into a newly-erected skyscraper on 42nd St. and convinced the mayor and city officials to construct a subway station which was an integral ingredient in making Times Square what it was–and is today.  When Ochs moved the paper’s headquarters across Broadway in 1913, the Times Building was re-named the Allied Chemical Building whose name remained for years until it became known simply as One Times Square.

The area grew in leaps and bounds and became a true focal point and as luminaries such as Irving Berlin, Fred Astaire and Charlie Chaplin became associated with this vast playground, Times Square was dubbed “The Tenderloin” because it was considered the most desirable location in Manhattan.  Speaking of tenderloin, the writer of this article vividly recalls “dining” at a place called Tad’s Steakhouse where the steaks were about as tender as a box of thick rubber bands but hey, what the hell, the meal only cost $2.49!

During the Depression, “The Great White Way” developed a black eye as gambling and prostitution became the order of the day.  The area had become considered downright dangerous.  Things continued their downward slide with the proliferation of Go-Go Bars (although too young to enter at the time, I remember trying to get a salacious glimpse through the window at the “Metropole”), sex shops, peep shows, “adult” theaters and whatnot.

In the 80s and 90s, Mayors Koch, Dinkins and Giuliani all made great strides in sweeping Times Square clean.  Peep shows were mostly out of sight, the “Squeegy Men” were washing windshields elsewhere and the area was gaining a new-found respectability.

In 2009 Mayor Bloomberg closed down traffic on Broadway between 42nd and 47th Streets which has made Times Square that much more pedestrian-friendly.

Building owners are actually required to display illuminated signs–“spectaculars” and “jumbotrons” among them–which has put Times Square on a par with Las Vegas in the bright lights department.  You might say it’s all come a long way since the first electrified advertising sign appeared on the side of a bank at 46th and Broadway in 1904!

New Years Eve is of course the biggie.  A brief look back: in 1904, ’05 and ’06 there had been a fireworks display from atop the Times Building but, when city officials deemed it too dangerous, the first ball (Waterford Crystal) was dropped shortly before midnight on December 31, 1907.  During World War II, there was a minute of silence and a recording of church bells which replaced the luminous ball due to wartime blackout restrictions.

These days it’s an energy-efficient LED ball which has become a year-round thing used on such other occasions as Valentines Day and Halloween.  There are usually around a million revelers but as 1999 became 2000 there was a crowd estimated at twice that, making it the largest gathering in Times Square since the end of World War II in August, 1945.

And there you have it–Times Square, “The Crossroads of the World”–and the very core of The Big Apple!