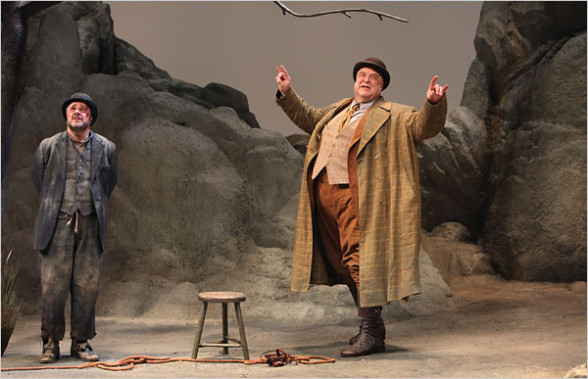 Patrick Stewart and Ian McKellen have brought the show on the road. The two elder statesmen of the British theater (and Hollywood) have finally brought their Waiting for Godot to Broadway adding Billy Crudup (perhaps the handsomest actor to play Lucky in the history of modern theatre) and Shuler Hensley (who appeared in The Whale at Playwrights Horizons last season). They’ve added Harold Pinter’s No Man’s Land to the mix. If they weren’t such charismatic performers, this double bill could be called the “old man weepies plays.” Instead, these two plays about disappointment, post-war Europe and identity are infused with an element of something closer to bromance.

In Waiting for Godot, Stewart and McKellen are two down on their luck vaudevillians (don’t leave before the curtain call, it’s a treat!), waiting for some guy named Godot. Stewart’s Vladimir is brash and confident. He’s the only one who remembers what’s going on. The only one who seems to have any memory whatsoever. McKellen’s Estragon is a marvel in hilarious understated acting. He’s cautious, he’s funny, he’s charming. The friendship between Didi and Gogo is heart-breaking and infused with real tenderness, even when everything around them seems to exist in a truly absurdist world. When Lucky and Pozzo arrive in the first act, the world is at its most absurd. Lucky shuffles in with a rope around his neck, laden with Pozzo’s bags. Pozzo holds onto the rope dressed like an English fox-hunter, but speaking like a Southern plantation owner. Crudup exhibits astonishing physicality as Lucky and shows great range beyond the charming rakes he historically plays. Hensley’s Pozzo, despite his bravado, is the least compelling character onstage and seems to be upstaged by his fellow actors.

No Man’s Land opens with two older British men drinking a lot of alcohol in a parlor after a night of drinking a lot of alcohol in a pub. They banter, they wit, they enjoy one another’s company and treat each other as if they are old friends or new friends, it’s never quite clear. But it is clear that not all is right with these two poets, in particular with Hirst played by Patrick Stewart. While Spooner (played by McKellen) seems ready to turn in for the night two younger men enter, they say that they work for Hirst and their menace is palpable. But little is revealed about any of these characters throughout the play and it’s easier to watch the actors revel in the language and the experience than try to make sense of any sort of “plot.” Pinter deliberately obfuscates the action of the play and the true motives of the characters. Again Crudup and Hensley are upstaged by their older fellow actors, but they don’t seem to mind at all.

McKellen and Stewart and director Sean Mathias made two difficult, bleak, yet darkly funny plays palatable, enjoyable and commercial, a feat that might disturb the playwrights, but surely pleases the producers.