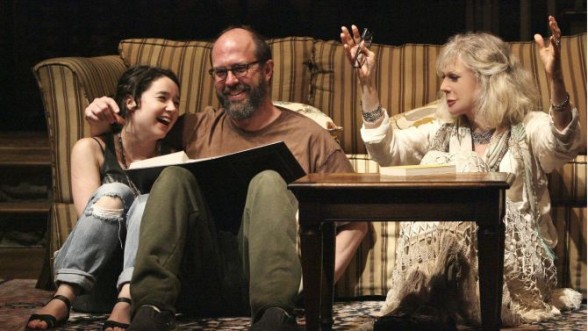 “What does it feel like to look attractive every day?”, asks Susie Keegan–played by Sarah Steele (Spanglish).

“I only get to see my flaws”, replies Nell McNally–played by Kate Jennings Grant (Love & Other Drugs).

“Do me a favor next time you are invited to my house: don’t flirt with another woman under the same roof, it’s rude!”, says Anna Patterson–Blythe Danner (Will & Grace)–to Michael Astor–Daniel Sunjata (The Devil Wears Prada).

It is summer in the Berkshires, Massachussetts, where successful actress Anna Patterson lives with her granddaughter, Susie, and her son Elliot Cooper (Eric Lange). Their house is a gorgeous Shingle style house (thanks to the wonderful set design by John Lee Beatty), where, besides Elliot’s terrible drinking and drug abuse,  life is peaceful, until one Friday afternoon…

Anna meets celebrity actor Michael Astor in a local food market and invites him to stay at her place for a day or two, because his house wasn’t ready yet to live in. Walter Keegan (Anna’s grandson and Susie’s father) is also visiting the family for a few days before he heads back to Los Angeles–he’s a very successful movie director; this time, though, he’s visiting with his new fiancee, a young and stunning-looking lady to whom he’s just gotten engaged: Nell McNally (Kate Jennings Grant). For the family, what is shocking about the new fiancee is that Walter had lost his wife almost a year ago, and he needs a replacement. How will his daughter Susie take it? And how about crazy Elliot, who had met Nell several years before, and still has a crush on her? And then, what happens when handsome and charming Michael meets beautiful Nell alone in the living-room on a stormy night in the dark, when the power got lost?

It is a story of complex relationships and jealousy!

The Country House, wonderfully written by Donald Margulies, is playing at the Samuel J. Friedman Theatre on West 47th Street. The cast is amazing–the audience will applaud when magnificent Blythe Danner appears onstage. Superb acting by Sarah Steele, and Eric Lange is particularly amazing. The set is spetacular, portraying well the rain storms common in Berkshires in the summer. It’s a short run, previews started on September 9th, and opening night is on October 2nd. Prepare to laugh hard; for theatre goers this comedy is a must-see. (Despite the old crowd, who are probably older subscribers to that theater–and so fascinatingly well-mannered for an old crowd–, this story was written in a very modern and fun fashion.)