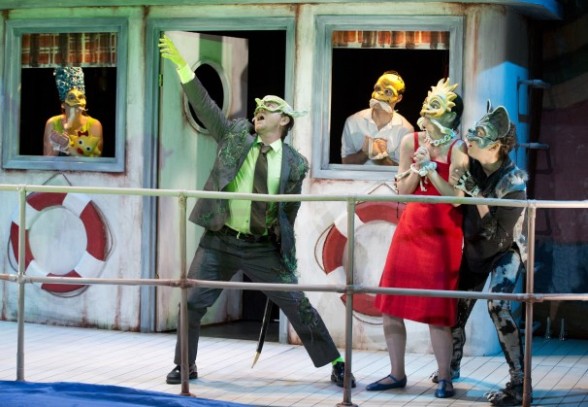 The post-apocalyptic narrative has gotten a lot of traction in the past few years. Some of these post-apocalyptic tales follow a formula, others transcend the formula and suggest how we may rebuild society. In Anne Washburn’s Mr Burns: a post-electric play, currently playing at Playwrights Horizons, we see Washburn’s vision of the role of narrative in a post-electric world. Washburn’s particularly focuses on how we as a collective would rebuild our story-telling and in the three acts of the play, we witness three different attempts to tell the same story: the story of an episode of The Simpsons.

The play opens around a trash-can fire. Survivors of an unspecified large-scale tragedy are remembering what happens in The Simpsons’ episode entitled “Cape Feare.” A group of five survivors work hard to remember specific lines of dialogue, images and what all of these represented in the world of The Simpsons. When another refugee arrives on the scene, everyone draws weapons. He offers his backpack to prove that he won’t harm them and he tells them the line that they’ve been struggling to get right. Then they compare real-life stories. Recount what they’ve seen in the days since the tragedy, where they’ve been and who they’ve met. Much like the recounting of the Simpsons episodes, they are searching for and processing information. 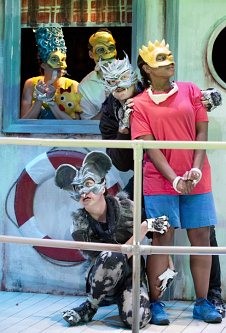 In the second act, which takes place seven years later, we see the same group, but this time they’re a troupe of actors who perform Simpsons episodes and commercials for audiences. They quibble over the contents of the scene and they compare their repertoire to that of another group, one that buys lines from people. It’s a discussion of a post-electric capitalism, where remembered culture is a commodity.

The third act takes all this to another level of interpretation. Seventy years have passed and the audience is treated to a third, more polished, version of “Cape Feare.” Without giving away the conceit, Washburn takes us back through the history of theatrical story-telling and lands on a particularly effective means of retelling a Simpsons episode live. The world has changed in the 77 years since the tragedy, but in many ways, humanity does not change. We still connect through story-telling and communal experiences.

The cast of off-Broadway regulars is top-notch, as comfortable in a naturalistic world where they are called by their real names, to working with masks, singing and impersonating well-loved Simpsons characters. Steve Cosson directs the piece confidently, creating a world that is recognizable and discordant simultaneously. Mr Burns is great piece of theater, a clever, play that is as entertaining as it is thought-provoking. 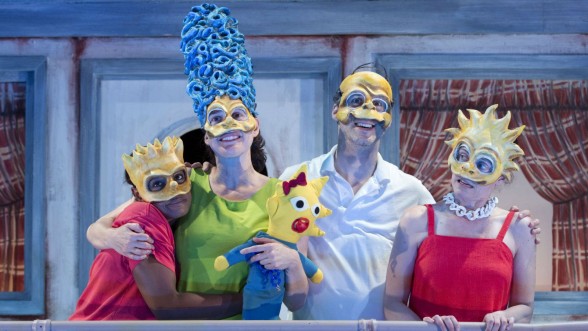