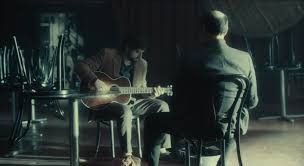 Inside Llewyn Davis, like most Coen brothers movies, is an odyssey, a journey that expands to almost absurd proportions with an ensemble of fantastic characters and varying locations. The film follows Llewyn, a folk singer in 1961 Greenwich Village, through a week in his life and is bookended by two mirrored scenes where he performs at the Gaslight Café and is then confronted by a stranger in a back alley. Llewyn doesn’t stay in one place very often, he rambles through his life couch-hopping, hitch-hiking and changing his plan when it suits him.

The world in which Llewyn lives is full of surreal imagery and romance. One morning he wakes up in the Upper West Side apartment of a Columbia sociology professor and his wife. Before he can leave, their cat runs out the door and he doesn’t have a key to bring the cat back inside. Throughout the film Llewyn’s relationship to this cat (whose name is funny, yet obvious, punchline at the end of the film) highlights aspects of his emotional journey. The cat becomes a foil for Llewyn, and his lack of responsibility for his life falls onto his responsibility to this cat.

Oscar Isaac plays Llewyn with intensity and sarcasm. He is an artist too big for the people he spends time with. He doesn’t bother being likeable, he hopes that his music will speak for itself. Which, unfortunately, it doesn’t. He’s surrounded by other folk musicians who are either far too earnest or recording novelty songs in hopes of making royalties.

The rest of the cast is well-rounded. Justin Timberlake as Jim, a sweet-voiced cuckolded singer living with his partner Jean (played by Carey Mulligan), is understated. F. Murray Abraham is an enigmatic Chicago promoter. John Goodman and Garret Hedlund make a strange pair of travel companions: a drugged-up jazz musician inclined to provoke and his quietly handsome chain-smoking valet. Carey Mulligan’s Jean is angry, profane and Llewyn classifies her as “careerist” when she tells him that she dreams of a life in the suburbs. Later he refers to people who aren’t artists as people who merely “exist” when talking to his housewife sister.

There are occasional moments in Inside Llewyn Davis that feel too much that the dialogue has been written by the Coen brothers and not organic to the characters themselves. Jean feels like this in particular and it can be jarring in a world that is so visually and thematically well-crafted. The cinematography is simultaneously lush and cold and the music, most of it arranged by T Bone Burnett (who worked with the Coen brothers on O Brother Where Art Thou?), is perfectly selected and evocative of the early 1960s folk scene.

Inside Llewyn Davis, in many ways, is an homage to artists who know that hard work and talent aren’t always enough to make it in the entertainment industry. And yet, the audience is also reminded that sometimes true innovation is standing right behind the man riding the subway and sleeping on couches.