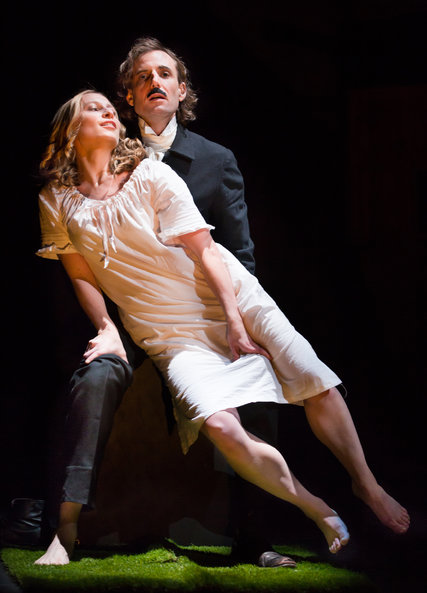 With a set comprised of doors on wheels that act as desks and tables as well as doorways, a piano and an organ, the piece moves seamlessly through the last few days of Edgar Allen Poe’s life. Poe’s letters to his mother-in-law (who was also his aunt) mark his action between New York and Philadelphia as he presents to the Philadelphia Literary Society.

The company uses extreme theatricality to explore the madness that Poe is descending into. Alessandra Larson, as Virginia, his dead wife/cousin, climbs and dances on and around him, expressing just how heavily she weighs on his mind. Ean Sheely inhabits Poe’s darkness and brings humor at times to an otherwise bleak character.

Audience members who don’t know (or remember) much about Poe’s life are assisted through narration and surtitles letting us know where certain scenes are taking place. Most affecting is the use of the announcement of Poe’s death. There are true moments of transcendent theatricality, but sometimes the pieces in between don’t quite work as well as they should. Dramaturgically the story is clear, but something is lacking. It seems as if perhaps the many years of development have polished the piece, but perhaps lost some of the spontaneity that was there when the idea was fresh.

Red-Eye to Havre de Grace explores the line between creativity and madness while also being a little bit mad itself, but I wondered why this play was being produced now. What does the audience learn from these last days of Poe’s life and why do we want to watch him suffer before he dies? But maybe that doesn’t matter and the stunning movement and music and the words of Poe himself are sufficient for audiences. 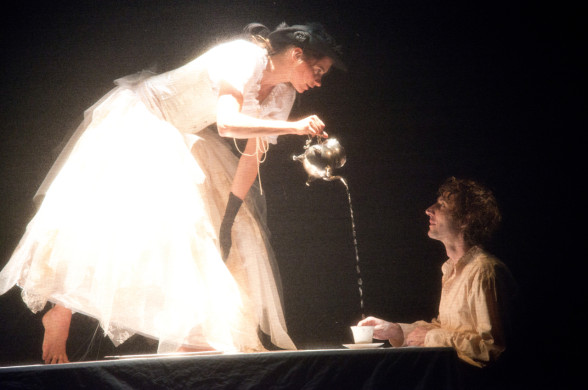