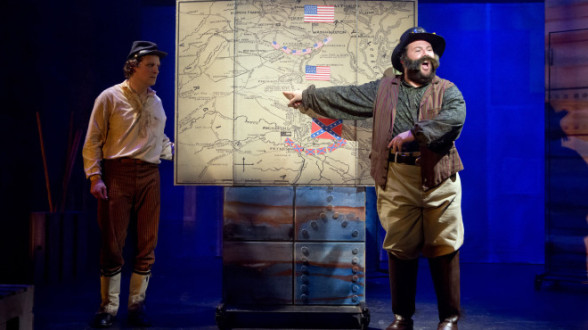 A history lesson, but an entertaining one–a children’s musical that, given its dark subject matter, is perfectly suitable for adults–Theatreworks USA’s “The Civil War” packs a lot into a fast-paced, occasionally moving (and often even funny) sixty minutes.  We see Irish immigrants land on our shores and almost immediately volunteer to serve in the Confederate army; slaves punished, then freed, then recruited to fight for the Union; boyhood friends take up arms on opposite sides; soldiers survive and soldiers die; brave generals and cowardly ones and a little of Lincoln and Robert E. Lee.  We even see a young lady so eager to serve that she tucks her hair beneath her cap and offers herself up as a boy.  (A gender flip that, according to history, took place during the Civil War more than once.)

In other words, there’s nothing here we haven’t seen before.  Even the format–reducing the scope of the conflict down to a series of very personal, very intimate vignettes, musical and otherwise–has been used in the past.  What sets the show apart is its hardworking cast: all the characters–soldier, general, war widow, slave–are played by the same five actors (Adam Fontana, Max Kumangai, Alyse Alan Louis, Jim Stanek, and Michael Thomas Walker) with only a blue hat or gray hat or a beard or an accent differentiating one from the other.  (The budget might be low but, thankfully, the sheer inventiveness makes up for it: for example, the long metal pipes used as “rifles” and “bayonets” were handled so believably that I could almost smell the gunpowder.)

The score, featuring some of the best-known songs of the era, is a treat; the simple backdrops work nicely; the battle scenes are authentic and gripping; and the direction by Jonathan Silverstein, with the constantly-shifting action, endless costume changes and surplus of props, spot-on.

Bottom line: whether you’re a Civil War buff, or simply a lover of children’s theatre, this is a show to see.

And if you’ve got a little one you can take along with you (the show is recommended for kids eight and up), even better.

(NOTE: “The Civil War” will be at the Lucille Lortel Theatre at 121 Christopher Street through August 16th.) 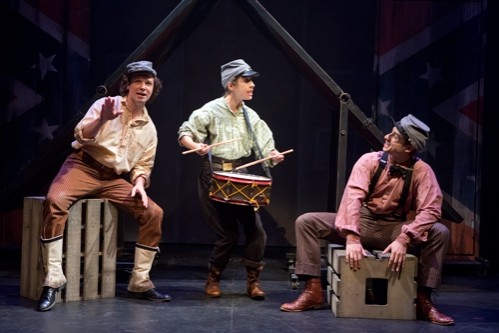