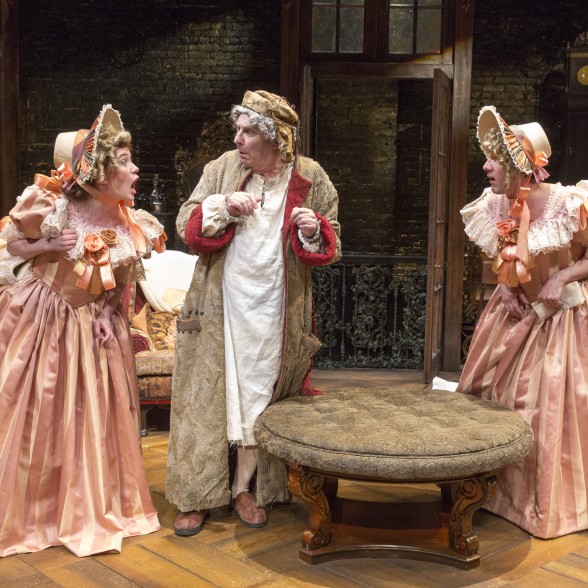 David Ives–author of sketches-for-the stage collections All in the Timing and Mere Mortals, the full-length hit Venus in Fur, and translations of old French classics like The Liar–has put his own unique spin on yet another chestnut, Jean-Francois Regnard’s early 18th century farce, The Heir Apparent.

The play stars Paxton Whitehead as the farty and phlegmy Geronte, a grey-faced old man who has summoned a lawyer to his Paris home to help him draw up his will.  This leads to all kinds of shenanigans, most of it featuring his nephew, Eraste, who aims to be the main beneficiary, and the romantically involved servants, Crispin and Lisette, who–though squarely in Eraste’s corner–are hoping for a tidy little windfall of their own.  Throw in the nephew’s pretty young fiancee (whom Geronte suddenly declares he intends to marry), the girl’s greedy mother, and the stunted and unhappy solicitor, and, as you might expect, all hell breaks loose in a hurry.

Whitehead is a hoot: dizzy and ditzy, his famously deep voice reduced to a froggy growl, he commands the stage even when he’s doing little more than silently wandering about in his nightclothes.  Carson Elrod as the conniving Crispin, Claire Karpen as his sharp-tongued paramour, and Dave Quay as the handsome but harried Eraste, are hilarious.  Amelia Pedlow as the lovely Isabelle, Suzanne Bertish as Madame Argante, and David Pittu as the lawyer (performing from his knees, no less; he is, as he’s constantly reminded, a dwarf)–fine comic talents, all–round out the cast.

The dialogue is in verse, and Ives’ rhymes are often deliciously lowbrow (“‘F’-you/nephew”, “venomous/enemas”), some of his more anachronistic references are delightfully timely (“…it’s beyond endurance/of course, if we had national health insurance…”), and John Rando, a frequent Ives collaborator, does a predictably fine job of directing.  The nicely-detailed set by John Lee Beatty, as well as the costumes by David C. Woolard, evoke the period perfectly.

Bottom line: there are worse ways to spend a fistful of francs than on the supremely silly and vastly entertaining The Heir Apparent.  C’est magnifique!

(The Heir Apparent will be at Classic Stage Company on E. 13th Street through May 11th.)