Parents with kids ten and older (although a nine-year-old would get a kick out of it, too; mine did) would be wise to take their young ‘uns to see “Peter and Wendy”, the Lee Breuer-directed, Mabou Mines adaptation of the book by the same name — written some years after “Peter Pan”, the play — by J.M. Barrie.
. 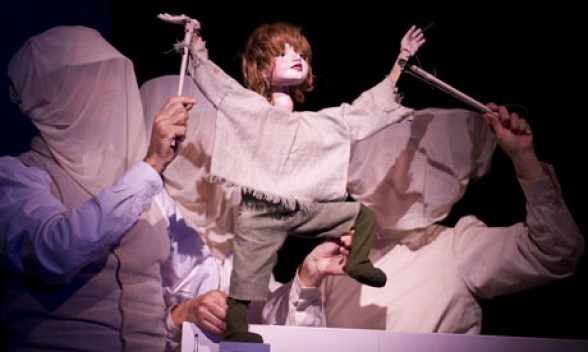 Wendy, of course, is Wendy Darling, the little girl who flies off with the free-spirited, magical Peter, along with her brothers Michael and John.  All the characters and exciting plot twists that you’ve come to expect of “Peter Pan” are here: Nana, the dog; Mrs. Darling, the worried Mom; Mr. Darling, the gruff Dad; the evil, vengeance-seeking Captain Hook; plus the kidnapping of Peter, the final climactic battle between Peter and Hook… it’s all crammed into the show’s more than two-and-a-half-hour running time, offering as complete a rundown of the Peter Pan legend as you’re ever likely to see.
.
And the amazing thing is, all the characters are portrayed by puppets (manipulated in full view of the audience by white-clad puppeteers wearing hats and veils to guarantee their anonymity), and voiced, every last one of them, by the very same actress.
.
That actress, reprising her award-winning role as the story’s narrator, is Mabou Mines vet Karen Kandel, and she is magnificent.  Switching from one character to another with incredible ease, effortlessly changing voices as she tackles multiple roles in the same scene — all while gliding across the stage with a lyrical, ballet-like grace — she turns in a performance that is nothing less than a tour-de-force.  One moment she is Peter… the next Wendy… the very next, Hook himself, hatching yet another nefarious plan.  And as she performs — and since she hardly ever leaves the stage, she is performing nearly all the time — the puppets are moved about so believably, so realistically, that they seem to come alive.  (Nana the dog was a particular favorite of mine; from her life-like snout to her “wagging” tail, she looked so real that I wanted to pet her!)
.
A cautionary note: the show WILL test the patience of all but the most attentive children, and the ending, in which we “meet”, years later, Wendy’s daughter and, ultimately, granddaughter (Peter, of course, keeps coming back, just as Wendy had hoped) DOES seem a tad labored; the show could have ended a whole lot earlier without sacrificing anything, at all.
.
But those are quibbles.  If you go — and you should — you will fall in love with Kandel’s twinkly-eyed virtuosity, the Celtic-influenced songs and music by the late Johnny Cunningham, but most of all… the puppets.  They are, indeed, a sight to behold, whether you’re nine, ninety, or somewhere in between.
.
Don’t delay, though: this production of “Peter and Wendy” will be at Times Square’s New Victory Theatre only through May 22nd.
.
THEATRE REVIEW by Stuart R. Brynien