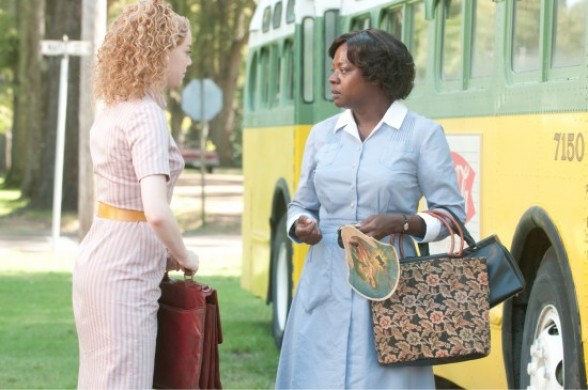 .
Skeeter has something that the other women in her town (young and old) lack: compassion. One day, she decides to write a book about the hard-working, underappreciated maids that work for her friends. They need a voice, she realizes; they need an outlet. They need to have their stories told.
.
At first, they’re reluctant to open up to her, fearing that it will lead to problems with their employers.
.
Eventually, though, she talks two of the maids into agreeing to be interviewed: angry Aibileen, who works for Skeeter’s best friend, Elizabeth; and Minny, a younger, wryly funny maid in the employ of the town’s white-trash blonde, Celia (Jessica Chastain, achingly vulnerable.)
.
Pasts are revisited, secrets are revealed, and old wounds — some of which have been festering for years — are uncovered. Soon, every maid in town is unburdoning herself to Skeeter . . . and the book (published anonymously, and naming no one) comes out.
.
Stone is the star of the movie, its focal point, its conscience, playing the gutsy Skeeter with a mix of sass and verve and steel-jawed determination that makes her a joy to watch.
.
It is the maids, though, who steal the show. Viola Davis’ Aibileen has such fury burning in her eyes, such pent-up hostility, that even as she peels away the layers of her past you expect her to explode at any moment. And Octavia Spencer’s Minny, with her wit, intolerance for fools, and no-nonsense approach to everything from frying chicken to coping with her unpredictable new boss, is wonderful.
.
There are men around, of course, but few of them have anything significant to do; this is, indeed, a movie about women, and a small group of systemically oppressed women at that.
.
Are there slow spots? Sure. But writer/director Tate Taylor (working from the best-selling novel by Kathryn Stockett) has crafted a richly-textured story that pulsates with life.
.
“THE TREE OF LIFE”
. 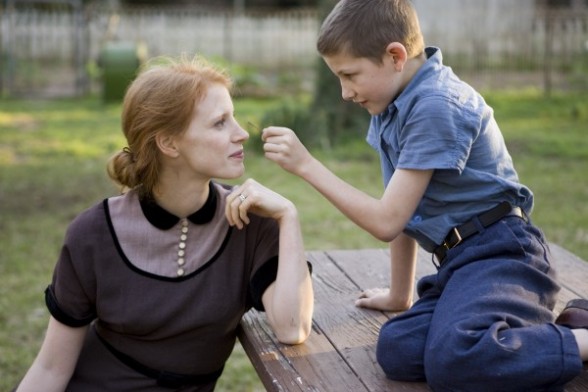 Two things you will need in abundance in order to enjoy Terrence Malick’s “The Tree of Life”: perserverance (it’s nearly two and a half hours long, and contains more artsy flourishes than most mainstream American movies these days), and a yen for films that are neither chatfests nor action flicks, but almost entirely, and overwhelmingly, visual.
. 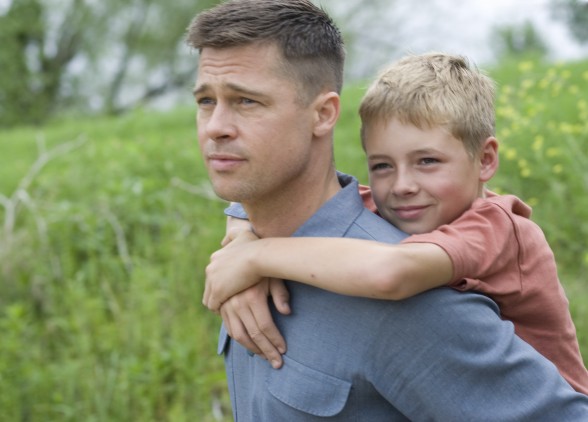 Brad Pitt and Jessica Chastain star as a typical middle-class couple trying their best to raise three young boys in a Waco, Texas suburb. In a series of brief, languidly-staged scenes, nearly cinema verite in style, we follow the boys from birth, through their toddler years, and on into grade school. We watch them grow, play, fight, bond. Gradually, the camera begins to focus on the oldest — soft-spoken, dour-faced Jack — and his relationship to his siblings, his parents, and the world at large.
.
The story begins with the off-screen death of one of Jack’s brothers — they’re adults now — and is told, for the most part, in flashback. Interspersed among Malick’s forays into the family’s troubled past are lovingly shot images of the creation of the universe… the beginnings of life on earth… the rise and fall of the dinosaurs… and — ultimately — the misty-eyed reunions waiting for us all in the afterlife.
.
As the rigid, disciplinarian Dad who insists on being called “father” and “sir”, Pitt is excellent (and a far cry from his numbers- crunching baseball executive in “Moneyball”); Chastain shines as the kind of Mom every kid would love to have, the yin to her husband’s yang, a smiling, bright-eyed woman full of fun, pep and playfulness; Hunter McCracken (a non-professional) as the taciturn, eleven- year-old Jack, manages to do a lot with very, very little; and a haggard-looking Sean Penn has even less to do — but does it well — as grown-up Jack, middle-aged and hollow-eyed and haunted by his memories.
.
There are touching moments, to be sure — only someone with a heart of stone would fail to be moved by this sad and troubled clan — but so much of the story is obscured by Malick’s grandiose vision, his ham-handed, computer-generated symbolism, that you may be checking your watch long before this slow-moving film is over.
.
FILM REVIEWS by Stuart R. Brynien