“Extremely Loud and Incredibly Close” is, like all adventure yarns, the story of a hero on a quest, only this adventure isn’t set in deep space, or the high seas, and our hero isn’t Captain Kirk or (heaven forbid!) Jack Sparrow; no, this one is set amid the crowded streets and soaring skyscrapers of New York City, and the hero is a little boy, age nine, named Oskar.
.
Oskar (played by sensational newcomer Thomas Horn, who was plucked right off the set of a Jeopardy! kids tournament, of all things) is an intense lad who is also bright, imaginative, and (his own word) odd. After his father (Tom Hanks, reliable as always) dies on 9/11, Oskar discovers a mysterious key among his father’s possessions and immediately sets out on the seemingly impossible task of finding the lock it belongs to. As his grieving mother tries to cope (Sandra Bullock, tugging at the heartstrings in a moving performance), Oskar discovers a clue. Soon, he is compiling a long list of people (strangers all) who may be able to help him on his journey, and is trying to track them down. 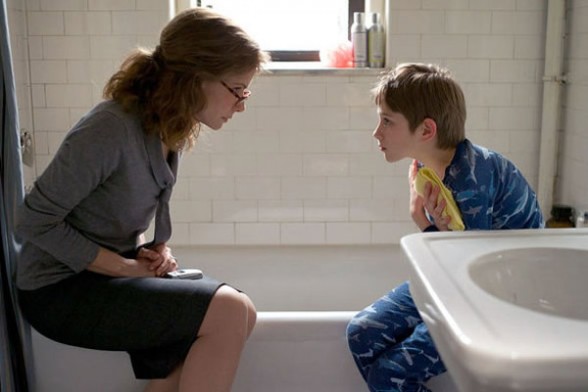 Two of them — an unhappy Viola Davis, and her no-less-troubled husband, Jeffrey Wright — share scenes with Oskar that rank among the best in the movie (the one with Wright is particularly well-played, and it provides an answer to the “riddle of the lock” that — like a couple of other late plot twists — you probably won’t be expecting).

Some of this year’s Best Picture nominees feature kids — boys and girls — turning in spectacular performances in supporting,  even leading roles.
.
Others fill the screen with such beauty — eye-popping sets, stunning cinematography — that nearly every frame is a work of art.
.
Martin Scorcese’s “Hugo” does both.
.
Hugo is a boy of twelve or so, a petty thief, who spends most of his time at a bustling train station in 1931 Paris. When his father dies, his alcoholic uncle — who operates the station’s giant clocks — takes him on as a kind of apprentice, and suddenly the boy isn’t just hanging around the station; he’s living there. Soon, he finds himself at odds with the station’s curmudgeonly toyshop owner, who accuses him (with good reason) of stealing. The old man is particularly interested in a small pocket-sized notebook that Hugo’s father left behind.  This piques the boy’s curiosity: Why in the world is the old man so interested in it?
.
The rest of the film follows Hugo and the shop owner’s goddaughter, Isabelle, as they embark on a “great adventure”: trying to get to the bottom of her sad Papa’s “secret”. Along the way we see Hugo working on the child-sized robot, or “automaton”, that his Dad (a clockmaker and inventor) had been tinkering with (just as his counterpart in “Extremely Loud and Incredibly Close” goes in search of a lock, Hugo — in order to make the robot come alive — must somehow find its key); we watch as Hugo meets Isabelle’s sweet-natured godmother, who, as it happens, has a secret of her own; and we sit on the edge of our seats as Hugo, ever resourceful, keeps narrowly escaping the clutches of the station’s chief security officer.
.
All of this is photographed so beautifully, so opulently, that it’s hard to look away from the screen. From the sumptuous sequence at the very beginning, which establishes the crowded station in all its glory, to the sweeping, bird’s-eye views of Paris, to the lingering shot of the sprawling Parisian bookstore that pops up unexpectedly near the end … director Martin Scorcese, cinematographer Robert Richardson, and a veritable army of artists and designers have created a visually spectacular film. (And the 3-D doesn’t hurt, either.)
.
Asa Butterworth, with his beautiful, nearly feminine features and ethereally blue eyes, is a mesmerizing Hugo; Chloe Grace Moretz is terrific as Isabelle; Ben Kingsley is heartbreaking as the tortured old shopkeeper; and Helen McCrory manages to dominate, in her own subtle way, every scene she appears in as Mama Jeanne. (Why the whole lot of them wasn’t nominated for Oscars ranks as one of the great cinematic injustices of the year.)
.
Sacha Baron Cohen also does fine work as the socially awkward, comically inept station inspector.
.
“Hugo” is not only a great movie, but — in the end — an homage to the art of moviemaking. Don’t be surprised if Scorcese and his film both waltz home with Oscars.
.
FILM REVIEWS by Stuart R. Brynien