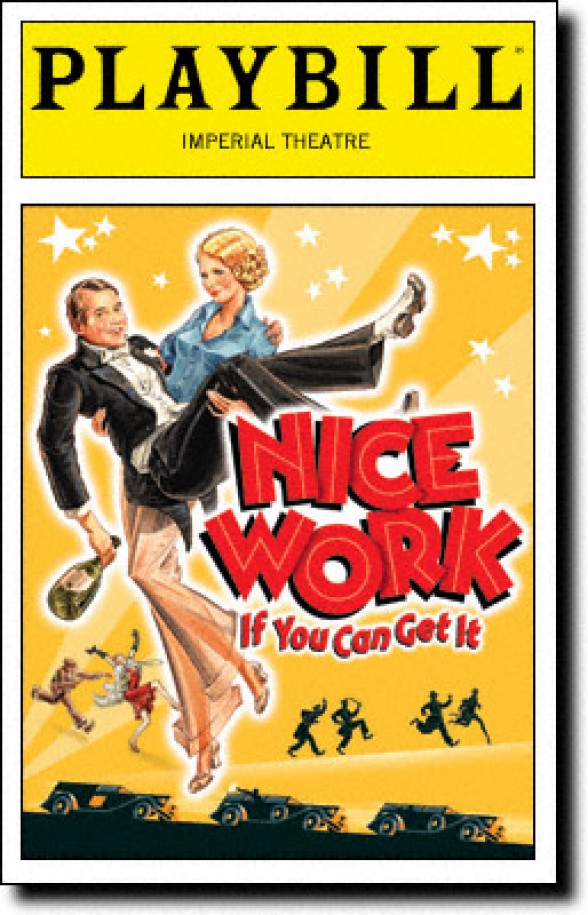 In the sparkling new Gershwin Brothers musical “Nice Work If You Can Get It”, Matthew Broderick stars as Jimmy Winter, an easy-going ne’er-do-well who spends his nights partying at 1920s Prohibition-era speakeasies, and his days waiting for his wealthy mother to hand him the reins of the absurdly successful family business (although, for reasons that don’t become clear until evening’s end, she has never quite revealed to him what the business actually is).
.
The story begins when tomboyish bootlegger Billie meets Jimmy outside a club one night. Quickly, she hatches a plan: she and her confederates will stash their hooch in the basement of the long-vacant mansion Jimmy’s family owns on Long Island. The plan works well at first, but then things go hilariously awry. Jimmy shows up unexpectedly, Billie’s booze-running buddies, caught in the act, are forced to cover their tracks, and before long, hearts are a-flutter, marriage vows are broken, the feds are swarming in — and even Jimmy’s mother finally arrives, with the biggest and most surprising revelation of all.
.
Broderick is no Tommy Tune, but singing and dancing with the consummate ease of the seasoned Broadway professional, he never fails to delight. As Billie, Kelli O’Hara is a gifted comedienne in one scene, impossibly romantic in the next (her “Someone to Watch Over Me” in Act I is a gem); Tony-winner Michael McGrath is terrific as Cookie, the bootlegger-turned-butler who ends up earning Jimmy’s trust; Chris Sullivan shines as his oafish, lovesick buddy Duke; and Robyn Hurder is positively charming as the hard-on-the-outside, soft-on-the-inside showgirl, Jeannie Muldoon. Judy Kaye (who also won a Tony) does fine comic work as teetotaller-turned-party girl Estonia Dulworth, Stanley Wayne Mathis excels as the beleaguered Chief Berry, Jennifer Smith (subbing for Estelle Parsons) was very good as the matriarch with a secret, Millicent Winter, and Jennifer Laura Thompson and Terry Beaver do top-notch work as the womanizing Jimmy’s latest wife, Eileen, and her father, the uptight Senator Evergreen.
.
Joe DiPietro’s book is consistently funny; the direction and choreography by Kathleen Marshall (with the help of one of the best dance ensembles on Broadway) is superb; and the sets and costumes — by Derek McLane and the late Martin Pakledinaz — are magnificent.
.
And — oh, the tunes! “Let’s Call the Whole Thing Off”, “Fascinating Rhythm”, “But Not For Me” … they’re all here, straight from the Gershwin songbook.
.
“Nice Work If You Can Get It” is scheduled to close November 18th. Get your tickets now.
.
‘S Wonderful!
.
THEATRE REVIEW by Stuart R. Brynien