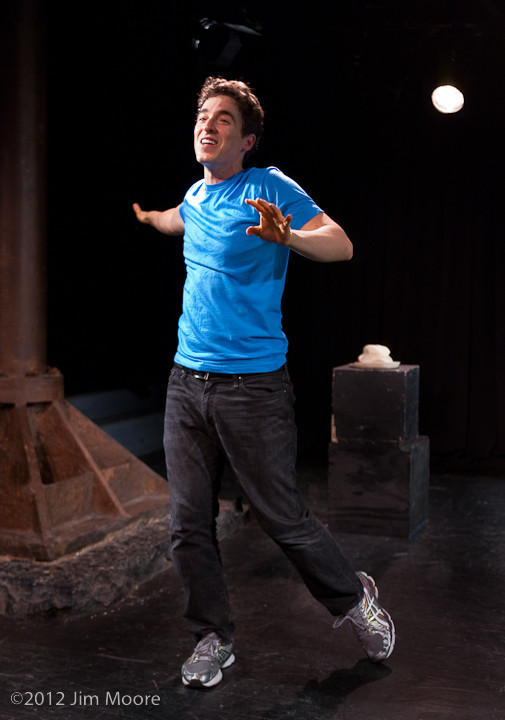 A performer to watch for is Gustavo Pace, a young man from Brazil whose solo show, “Naked Brazilian”, recently enjoyed a one-night-only workshop production, under the direction of Rachel Eckerling, at Dixon Place on the Lower East Side. Combining heavily-accented English with snippets of his native Portuguese, Pace shares the story of his boyhood in Rio de Janeiro, his departure for law school (a course of study forced upon him by his stern and hard-drinking father), and his ultimate decision to pursue his dream — theatre, or more specifically, clowning — and head off to New York to become an actor. Dressed in plain dark slacks, with a blue tee and red suspenders, sneakers and socks — all he needed to look even more like a clown was a big red nose and  floppy shoes — he darts about the mostly bare stage (his only props are an old steamer trunk with smaller “mini-trunks” hidden inside it) seguing from one amusing tale to another. We meet, in addition to his dad, a series of handsome but ultimately disappointing male lovers, a couple of equally unsatisfactory New York roommates, his therapist, and even a teacher or two.

Are there too MANY anecdotes? Yes. A few of them end too abruptly, as well. (The funniest story of the evening, about an ill-fated rendezvous with a brand-new boyfriend — in, of all places, his father’s car —
comes to mind.) Also, in future performances — and make no mistake, “Naked Brazilian” has a promising future — he’d be wise to take the time to emphasize each character’s uniqueness; his cast is large and varied, and the lines between them are often blurred.

Bottom line: “Naked Brazilian” has charm to spare. Now it’s time to get to work.

(Incidentally, for those wondering if there are, indeed, any naked Brazilians in “Naked Brazilian” … there aren’t. Except for a moment or two early on in which he parades around in his skivvies, Mr. Pace is fully clothed throughout.)