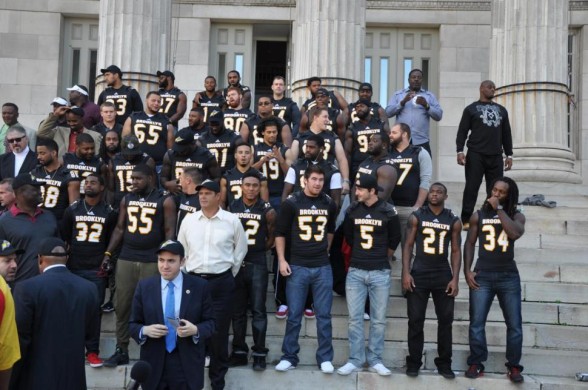 The players trot out onto the field, suited up and whooping it up and ready for battle.  The fans cheer their hometown heroes, boo the visiting villains.  The countdown clock on the scoreboard ticks off the time: fifteen minutes till kickoff.

Another NFL game? A big-time college clash, featuring two of the top teams in the land?

Nope.  We are, instead–my wife and I–moments away from a game in the brand-spanking-new Fall Experimental Football League, or FXFL, we’re at MCU Park in Brooklyn’s Coney Island–warm weather home of the minor league Brooklyn Cyclones baseball team–and on this October night, New York’s newest professional football team, the Brooklyn Bolts, is going up against the Omaha Mammoths.

Professional football is back in New York…and it’s about time.

The FXFL–a minor or “developmental” league in its own right, created to give guys a chance to strut their stuff in front of NFL scouts and coaches–is comprised of four teams, all of which will play, in its inaugural season, an abbreviated five-game schedule.  The teams–the Bolts and Mammoths, plus the Boston Brawlers and the Miami Blacktips–feature players who have been in the Big Time, yearn to make it to the Big Time, or are just playing for, as the saying goes, the Love of the Game.

How many of the players have I heard of? Not many.  In fact, after looking over the Bolts’ roster and hearing the names of some of the Mammoths,  only one rings a bell: Jordan Jefferson, one of the Omaha quarterbacks, who played his college ball–often on TV on Saturday afternoons–at perennial footbal powerhouse LSU.  The others–even the “skill position” players, the backs and receivers–are a mystery to me.

But it doesn’t matter. How could it? The field looks perfect, the crowd is buzzing, the evening sky is a deep, clear blue, and there’s an invigorating nip in the air.

I’d been waiting a long time for football to come to this park, and now–here it is.

The game starts uneventfully, both teams exchanging punts thanks to some lackluster offense, until the Bolts march down the field, using a nice mix of runs and passes.

Every Bolt first down is accompanied by a mini-spectacle: a flash of lightning on the scoreboard, a loud CRACK!, the rumble of thunder.  The first time it happened I was a little startled.  By now I’m getting used to it.

I wonder if on Omaha’s home field, first downs are celebrated by the loud and thunderous mating cry of the woolly mammoth.

We score, finally, on a scamper by running back Kareem Huggins, one of those players I’ve never heard of (even though he apparently once played, however briefly, for my favorite team, the Jets).  The extra point sails wide of the goal posts, no good.

Well into the first quarter, whole sections of the stands remain empty–there are no more than a couple thousand fans in the park, far fewer than the eight thousand or so that the Cyclones regularly draw–and the most populated areas, I notice, are filled with kids: big ones, little ones, with their moms or dads or both.  I even see a few babies, swaddled up in blankets, puffed up in their winter suits, cuddled up close to their parents’ chests in their snugglies.  Some of them look no bigger than footballs themselves.

Directly behind us (we’re just off the twenty-yard-line, fifteen rows up), a little girl sits cozied up against her dad, her coat zipped all the way to her chin, her hood tied tight.  She looks to be eleven, maybe twelve.  Her father has been coaching her on the rules of the game; this is probably the first game she’s ever attended.

“See those stripes on the field?” he asks.

“Those big, wide stripes? The ones that come up every ten yards?”

“Well, when each team is on offense, it gets three chances–three DOWNS”–he underscores the word for emphasis–”to go from one big stripe to the next.  When they do, it’s a first down.”

I smile, wondering if our own daughter, who hates football–she’s much more of a baseball and basketball fan–would understand “first downs”.

I begin to regret not taking her to the game, so that we could engage in some father-daughter sports talk of our own.

Our defense holds–it’s been pretty stout, so far–but our quarterback gets sacked behind the line of scrimmage, and we’re forced to punt.  Again, our “D” proves to be up to the challenge. Only this time, after we regain possession, our signal-caller throws an interception, the Mammoths drive down the field, their quarterback drops back to pass, spots an opening, sprints toward the end zone, and scores from twenty-seven yards out.  The point-after attempt is successful, and suddenly we’re behind, 7-6.

Even worse, just minutes later, the ‘Moths get the ball back, and the very same quarterback–till now, both squads had been shuttling quarterbacks back and forth, trying to give both plenty of playing time–lofts a long pass downfield, which his receiver hauls in for a spectacular fifty-one yard gain.  One play later, the quarterback scores from a yard away, and the first half ends with our hometown heroes even further behind, 13-6.

Lightning has struck twice, alright–but for the wrong team.

After the players have headed off to their respective locker rooms–some jogging, some walking, some limping–I’m climbing the stairs to the concession stands on the concourse level (one advantage of attending a minor league football game and not an NFL or big-time college game is that the food is much less expensive), when I turn around and take another look at the field.

A portly, cherub-faced fellow is standing down there, flanked by a couple of kids.  Usually, he wears a cheap toy crown, as befitting his “royal” status.  Now, however, he’s got on one of those old-time football helmets, a thin leathery-looking thing, like the kind you see in grainy old photographs of the gridiron greats of the ’30s.  He is King Henry, a local TV personality who entertains the crowd at Cyclones games, only now he’s calling himself Heisman Henry, because this is, after all, football, and college footbal’s Heisman Trophy is one of the most coveted awards in the sport. He’s about to play some sort of trivia game with the kids, both of whom he’s hand-picked out of the stands.

“Get off the field, Henry!” someone yells.

Clearly, not a fan.

Halftime ends with a dance routine by the Brooklyn Bolt Dancers, seven young ladies in black-and-gold, the team colors.  They might be the same girls who work Cyclones games as the Beach Bums, bu I can’t be sure.  They all have long hair, even longer legs, and a hell of a lot of energy.

It can’t be much more than forty degrees by now, the temperature has been dropping steadily, and I can’t help thinking, as they do their kicks and splits, that they must be freezing their pom-poms off.

The teams return, and the second half begins.  I’ve been looking at Coney Island’s newest roller coaster, the Thunderbolt (after which, naturally, the team is named) looming high over the stadium, just beyond the left field wall, and nearly miss the kickoff.

The Bolts start sluggishly, especially on offense.  Suddenly, the running game has ground to a halt, and our quarterback, Corey Robinson–who had some success earlier–a short fellow with a whip-like, nearly side-arm delivery, is sacked on consecutive plays, losing a big chunk of yardage.  We have to punt.

Our defense holds its own, though, forcing the Mammoths to give the ball right back.

And then…our offense comes alive.  We run.  We pass. We’re on the move.  From the Omaha seven, with the crowd cheering, the Brooklyn Bolts Dancers cheering, everyone cheering (except, of course, for the Mammoth faithful, some of whom have travelled with the team), our other quarterback–Louisiana product Kolton Browning–takes the snap, drops back a few steps, darts through a hole in the line, and…scores!

He gets up a little gingerly, walks stiffly to the bench, and then–after loosening up under the watchful eye of the trainer–trots off to the locker room.

The crowd’s getting a little antsy.  Even the public address announcer, who’s been trying to fire up the crowd all night–”First down, Bolts!” (pop, crackle, lightning flash)…”Touchdown, Bolts!” (clapping, cheering, whoops and whistles)–seems to have lost some of his enthusiasm.

Only a few minutes are left, and our prospects are starting to appear awfully bleak…especially when the Mammoths stomp right down the field, looking for all the world like they’re on their way to the touchdown that will wrap this game up.

But then–somehow–our defense holds (again), and forces Omaha to try a field goal.

Which–somehow–our stalwart soldiers on the defensive line soundly, and decisively…block.

The crowd is abuzz once more.

But our offense stalls, and soon it’s fourth down, seconds to go.

The Bolts call a time-out.  It doesn’t take a genius to know the question on everyone’s mind: should we go for the field goal, which would be enough to give us the win, or–considering that we have about as much faith in our kicker, who has already missed a pair of extra points, as we have in the Tooth Fairy–should we roll the dice, take a shot at the end zone, and try to win the game with a touchdown?

The teams return to the field.  Everyone is standing, and not just for a better view.  And we all hold our collective breath–it’s the field goal unit that’s lining up.

It will be a thirty-seven yard attempt–not a “gimme”, by any means.

Nick Marsh, our kicker, gets ready.  The signals are called.

Now the Mammoths call time.  Gamesmanship, all the way.  It’s almost required of the defense to call for time in this situation.  “Ice” the kicker. Make him think. It’s done at every level–probably Pop Warner, too.

Second try.  The ball is snapped.  The holder snatches it out of the air, spins it around, and puts it down.

Our kicker strikes it dead-on–THWACK!

Two thousand pairs of eyes follow the flight of the ball as it soars, end-over-end, toward the goal posts.

And watch it split the uprights–it’s good!

Pandemonium on the field.  Celebrations in the stands.

The Bolts dance crew greets us at the gates on the way out, wishing us safe travels home.  They’re smiling.  We’re all smiling.

It was quite a game.

Already, I can’t wait to see the next one.

(NOTE: The Brooklyn Bolts’ final home game, at MCU Park in Coney Island, will be on Friday, November 7th, at 7:30 PM.  The first two thousand fans will receive a free jersey.  Visit BrooklynBolts.com for tickets.) 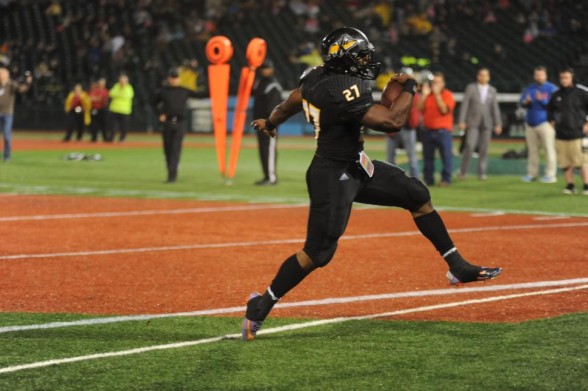