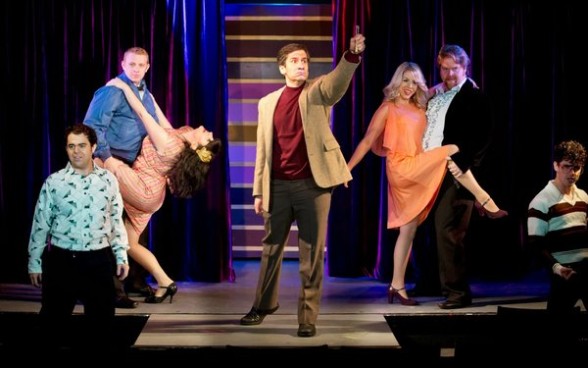 Disaster flicks in general–and the 1970s kind in particular–are in for some hilarious lampooning in the jukebox musical “Disaster!”, currently running Off-Broadway at St. Luke’s Theatre.

All the cliches are here: the singing nun (with a gambling addiction, no less), the scientist or “disaster expert” whom no one will listen to, the arrogant moneybags who owns the floating casino that’s about to sink like a rock with everyone aboard, the adorable little boy and his sister, the dying middle-aged housewife…and more.

There isn’t an original song in the show, but who cares? They’re all gems, seamlessly integrated into the laugh-a-minute dialogue so that at any moment you’re liable to hear such 70s classics as “Don’t Bring Me Down” (there’s a great pun attached to that number; watch for it) or “I Am Woman”, “Hot Stuff” or “Knock On Wood”.  You’ll find yourself smiling as each song begins–just the first couple of bars will lead to a delicious sense of anticipation–and, after dancing in your seat and tapping your toes, you’ll still be smiling at song’s end.

The acting was broad (this isn’t Chekhov, after all) but brilliant.  Jennifer Simard was delightful as the soft-spoken, steel-jawed Sister Mary (who, as it turns out, hasn’t quite kicked her “habit” yet)…young Jonah Verdon pulled double duty with the aplomb of a seasoned veteran as not just one of the kids, but both of them, the mop-topped Ben and his squeaky-voiced twin sib, Lisa…Annie Golden (subbing for Judy Gold) was a treat as the terminally ill (and terminally twitchy) Shirley…and Seth Rudetsky, who helped create and co-wrote the show, was in fine form as the forever frustrated voice of doom, the sad-faced and oh-so-much-smarter-than-everyone-else Ted.

Director Jack Plotnick’s cast marched along with gusto and precision, the “special effects” were hilariously inventive, and the whole show flew by in a brisk two hours–or (if you’re keeping score) just about the amount of time it took the boat to sink!