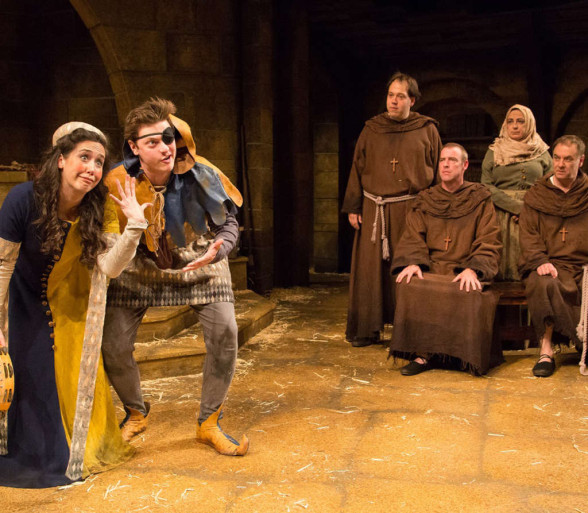 Set in a down-on-its-luck monastery in 13th-century France, Michael Hollinger’s Incorruptible–now being revived at the Arden Theatre in Philadelphia–is about religion, faith, monks, miracles, nuns, the Pope, saints (real AND imagined)…and grave-robbing.

And that’s just for starters.

Brother Martin, who keeps the books at his quaint little church, is worried: the money’s just not coming in.  The coffers are empty, and the cupboards are bare.  In addition, the Pope himself was supposed to pay a visit, but has decided instead to honor with his personage a rival church nearby; that very same establishment has begun to claim that the patron saint housed in Brother Martin’s monastery is really their own; a crooked minstrel, who eventually confesses (not without some coaxing) to being the cause of all the confusion, arrives; a Jewish moneychanger turns up dead, practically on their doorstep (leading to the question: where, exactly, do we bury him?)…the plot twists come at us with head-spinning (and hilarious) regularity.

The cast is superb.  Kudos to them all: Ian Merrill Peakes as Brother Martin; Paul L. Nolan as his boss, the abbot; Sam Sherburne and Josh Carpenter as  Brothers Olf and Felix, the novices; Mary Martello as the peasant woman; Alex Keiper as her daughter and Michael Doherty as the minstrel (extraordinarily gifted physical comedians, those two); and Marcia Saunders as the rival church’s abbess.

Matthew Decker directs with a comic flair that, more often that not, turns the merely madcap into sheer, unadulterated lunacy (some moments, especially in Act II, are positively inspired), the set by James Kronzer, with its bare stone walls, plain floors, and tall windows (converted by the second act into faux stained glass affairs) looks appropriately dank and dreary, and the costumes and lighting by Lauren Perigard and Eric Southern, respectively, are terrific.

Many shows suffer from second act-itis–the first act pops, but the second, perhaps because the creatve team ran out of ideas, fizzles.

Not so here.  Incorruptible is farce at its best; a livelier one would be awfully hard to find.

And you can bet your last penny on that. 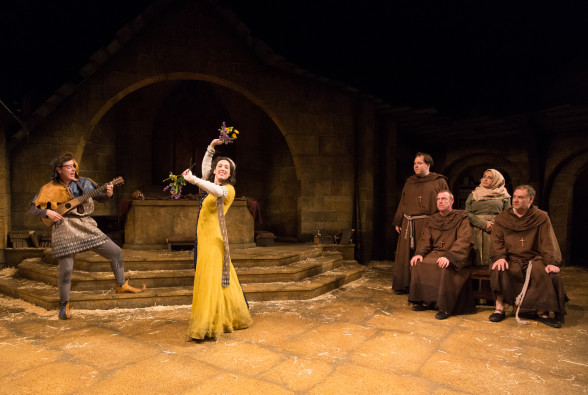 (NOTE: Incorruptible will be at the Arden Theatre in Philadelphia through June 22nd.)