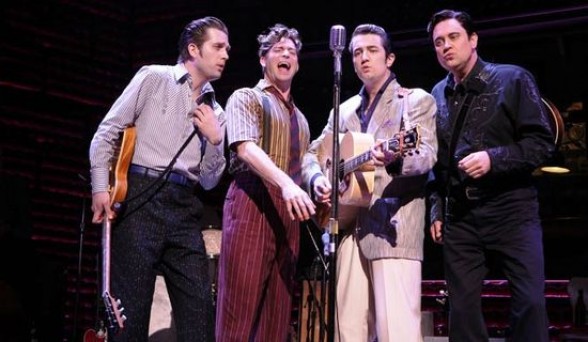 Back in 1956, Sam Phillips — founder of Sun Records, the tiny southern record label that helped usher in the rock ‘n’ roll era — invited to his studio his four top acts: Elvis Presley, Carl Perkins, Johnny Cash, and Jerry Lee Lewis. It was the only time the four of them ever played together.

“Million Dollar Quartet” is the story of that historic gathering, and — if this show is any indication — what a toe-tappin’, foot-stompin’ night of music it was.

Eddie Clendenning played young Elvis with a low, occasionally even indecipherable growl that made me wish he’d spent less time channeling the King (the Prince?) and more time just being himself (though, no doubt about it, the man can sing); Robert Britton LyonS, as rockabilly pioneer Carl Perkins, acted beautifully and played his guitar even better; Lance Guest not only looked and sounded enough like Johnny Cash to make you believe you were watching the real thing but, in some of the show’s quieter, more serious moments, did a fine job of conveying Cash’s unhappiness and uncertainty; and the evening brightest star, the delightful David Abeles, played Jerry Lee Lewis with a wink and a smile and a cocky, even infuriating attitude — he had the goods (boy, did he have the goods!) and he knew he it.

Victoria Matlock as Elvis’ girlfriend Dyanne sizzled through a version of the pop classic “Fever” that nearly had me hunting for an aspirin and an icepack;  Corey Kaiser and Don Peretz were fine as the bass player and drummer, respectively; and James Moye as Phillips himself — mentor, confidant, cheerleader, and coach — was excellent, too.

.
More than merely another jukebox musical, “Million Dollar Quartet” also boasts a fine, occasionally even moving book; via brief asides, we learn about the history of Sun Records, and how Sam met and signed each of his prized young bucks. Kudos to Colin Escott and Floyd Mutrux for a surprisingly effective script, and to director Eric Schaeffer for bringing it to life.
.
With Jerry Lee & Co. jamming nearly non-stop from start to finish (including one last crowd-pleaser after the curtain call – don’t leave too early!), “Million Dollar Quartet” is a jukebox spectacular that is, indeed, four times the fun.

NOTE: The current cast of “Million Dollar Quartet” may differ slightly from the one reviewed above.