Home Theatre Reviews MICE AND RABBITS AND PUPPIES, OH MY: A REVIEW OF “OF MICE...
Facebook
Twitter
WhatsApp
Email
Print 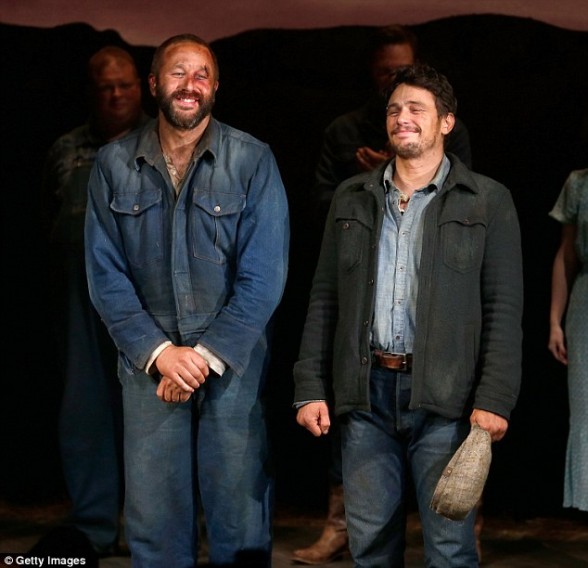 James Franco stars as George and Chris O’Dowd as Lennie in the occasionally moving but ultimately disappointing Broadway revival of the John Steinbeck classic, Of Mice and Men.

George and Lennie are, of course, itinerant laborers trudging from job to job along the back roads of 1930s California.  George is the smaller one, soured on life, more than a little cynical, yet still willing to engage in flights of fancy about owning land of his own some day; Lennie, the big one, is slow of speech and prone to forgetfulness (George has to give him the same instructions over and over again), and with a fearsome temper that is matched in size only by his enormous hands.  It’s those hands that have gotten him in trouble before–he has a fondness for petting things, and stroking things, mice and rabbits among them–and, as the play opens, it is yet another incident, involving a frightened young lady, that has sent them out on the road searching for work again.

This time their destination is a ranch in California’s Salinas Valley–George has heard they need a couple of fellas to help them stack the hay–and, once there, they encounter Curley, the boss’ son, who’s a bit of a bully and always ready to pick a fight, Curley’s new bride, whose flirtatiousness among the ranch hands sends her husband into fits of jealousy, cute little puppies, sad-faced dreamers…and it all comes to a head at the conclusion of the play with predictable (whether you’re familiar with the story or not) and tragic results.

Franco doesn’t embarrass himself, exactly, but he doesn’t give George any emotional heft, either; it’s a rote, paint-by-numbers performance, one in which he seems to offer precisely what he has to at any given moment, or whatever the text requires, but no more.  (Even his relationship with Lennie, his longtime personal albatross, seems perfunctory; he almost never displays toward Lennie anything besides exasperation, or anger.)

Faring considerably better is O’Dowd as Lennie himself; he plays the role exactly as you would expect it to be played–his interpretation of the big, powerful man-child hardly breaks new ground–but he inhabits the character fully and unselfconsciously, disappearing into it in a way that Franco never does.

As Curley’s wife, Leighton Meester seems miscast; the girl whom the workers describe before she makes her first entrance, well into Act I–sexy, probably more than little voluptuous, a “tart”–doesn’t quite jibe with Meester’s appearance.  The actress, lovely as she is, is short, reed-thin, and projects no sizzle, at all.  (Even her voice, tiny and fragile, lacks the requisite allure.)

Among the rest of the characters, nearly everyone is underwritten and underplayed, with the exception of Candy, the crippled geezer with the smelly old dog, who is nicely played by Jim Norton, and Crooks, the lonely black stable hand, portrayed with dignity and honor and just the right amount of orneriness by the very enjoyable Ron Cephas Jones.

Of Mice and Men, which Steinbeck based on his own novel, is a very talky play–the men sit around the bunkhouse bantering about their dreams, and then sit around and banter some more–and, unfortunately, director Anna D. Shapiro does little to offset that.  The pace is slow, and there’s almost no sense of urgency anywhere.  And when Shapiro does have to slow things down, to allow the enormity of a moment to sink in, let’s say–I’m referring to the two most important scenes in the play, both at the end, though I’m reluctant to reveal what they are–she rushes them a bit, leaving the audience not in tears, but, quite to the contrary, emotionally unsatisfied.

The set by Todd Rosenthal, on the other hand, is superb, from the twilit riverbank at the start and finish to the ultra-realistic, richly-detailed bunkhouse and Crooks’ tiny, book-lined shack. If only the rest of the production were as impressive.

Maybe they should have returned Candy’s dog to the pound (yes, there’s a real, live dog onstage, and he’s a scene-stealer), and given Lennie his rabbits, instead.